The World Factbook facts for kids 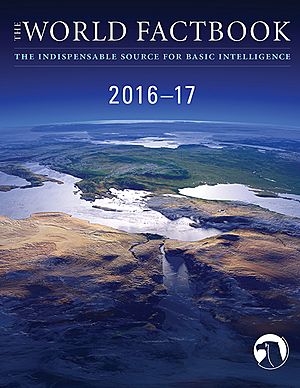 The World Factbook, also known as the CIA World Factbook, is a book that contains the Central Intelligence Agency's information about the world's countries. A new book is published every year. The Factbook provides a two- to three-page summary of the demographics, geography, communications, government, economy, and military of 272 countries, dependencies, and other areas in the world.

The World Factbook is designed to be used by people that work for the United States government, but it is also used by students, on websites, and in other publications that are not made by governments. Because the U.S. Government made it, it is in the public domain.

All content from Kiddle encyclopedia articles (including the article images and facts) can be freely used under Attribution-ShareAlike license, unless stated otherwise. Cite this article:
The World Factbook Facts for Kids. Kiddle Encyclopedia.