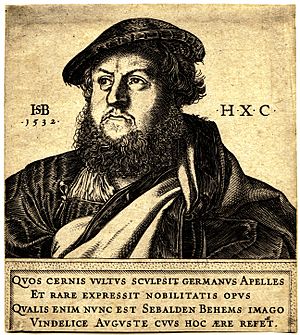 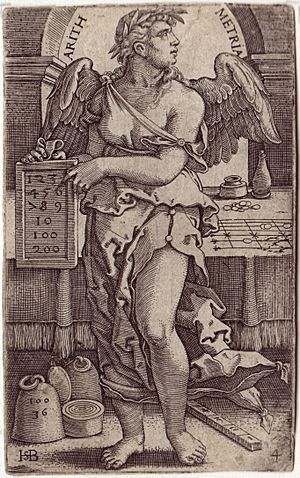 Hans Sebald Beham (1500–1550) was a German printmaker who did his best work as an engraver. He also designed woodcuts, painted and worked as a miniaturist. He is one of the most important of the "Little Masters", a group of German artists making old master prints in the generation after Albrecht Dürer.

Beham was born in Nuremberg in 1500 into a family of artists. In 1525, he and his brother were banished from Nuremberg because they were thought to have not accepted the Churches ideas (heresy) and blasphemy. They came back to the city in 3 months, but Beham was banished again in 1528 for publishing a book which was plagiarised from an unpublished manuscript by Albrecht Dürer.

Most people know him as "Sebald Beham". However, he signed some of his prints before 1532 with "HSP". After he moved to Frankfurt, he signed his prints with "HSB".

Beham made about 252 engravings, 18 etchings and 1500 woodcuts. He worked on small, very detailed engravings (sometimes as small as a postage stamp). This makes him part of the German printmaking school called the "Little Masters", since their works were so small. He created and published his works himself, but his larger works were mostly commissioned work to be sold.

He also made prints to be used as cards, wallpaper, coats of arms, designs for other artists and designs for stained or painted glass. He also painted a table top (now in the Louvre ) for Cardinal Albrecht, Archbishop of Mainz.

Beham mostly engraved pictures of peasants and scenes from myths or history. Since he was working at the same time as Dürer, the most recognised artist at the time, one of his early woodcuts, "Head of Christ", was thought to have been done by Dürer. Beham also worked with his brother Barthel, and shared ideas with him. Later, he re-drew some of Dürer's works like gus Melancholia of 1539.

After publishing a book about drawing horses, for which he was exiled, he wrote a book on drawing the human figure. His book was mostly just a simplified book of Dürer's own books, but his book was easier to use and cheaper than Dürer's books, so artists preferred to buy his.

All content from Kiddle encyclopedia articles (including the article images and facts) can be freely used under Attribution-ShareAlike license, unless stated otherwise. Cite this article:
Hans Sebald Beham Facts for Kids. Kiddle Encyclopedia.