Buckfast Abbey forms part of an active Benedictine monastery at Buckfast, near Buckfastleigh, Devon, England. Buckfast first became home to an abbey in 1018. The first Benedictine abbey was followed by a Savignac (later Cistercian) abbey constructed on the site of the current abbey in 1134. The monastery was surrendered for dissolution in 1539, with the monastic buildings stripped and left as ruins, before being finally demolished. The former abbey site was used as a quarry, and later became home to a Gothic mansion house.

In 1882 the site was purchased by a group of French Benedictine monks, who refounded a monastery on the site, dedicated to Saint Mary. New monastic buildings and a temporary church were constructed incorporating the existing Gothic house. Buckfast was formally reinstated as an Abbey in 1902, and the first abbot of the new institution, Boniface Natter, was blessed in 1903. Work on a new abbey church, which was constructed mostly on the footprint of the former Cistercian abbey, started in 1907. The church was consecrated in 1932 but not completed until 1938. The abbey continues to operate as a Benedictine foundation today, and is a registered charity under English law. 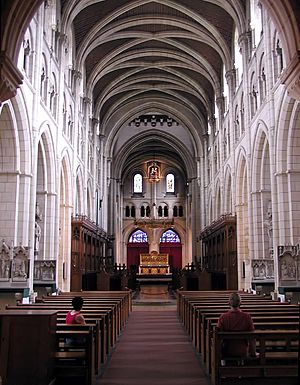 The first abbey at Buckfast was founded as a Benedictine monastery in 1018. The abbey was believed to be founded by either Aethelweard (Aylward), Earldorman of Devon, or King Cnut. This first monastery was "small and unprosperous", and it is unknown where exactly it was located, and its existence was "precarious" especially after the Norman Conquest.

In medieval times the abbey became rich through fishing and trading in sheep wool, By the 14th century Buckfast was one of the wealthiest abbeys in the south-west of England. It had come to own "extensive sheep runs on Dartmoor, seventeen manors in central and south Devon, town houses in Exeter, fisheries on the Dart and the Avon, and a country house for the abbot at Kingsbridge". The Black Death killed two abbots and many monks; by the mid 1300s, there were few left to maintain the buildings, some of which collapsed. By the mid 1400s however, the abbey again flourished.

At the time of the Dissolution of the Monasteries, the last Abbot, Gabriel Donne (d.1558), despite the solemn oaths he had taken, on 25 February 1539 together with nine others of his religious community, surrendered his abbey into the hands of Sir William Petre, as agent for King Henry VIII. On 26 April 1539 he was rewarded with a large annual pension of £120 which he enjoyed until his death. The other monks, who all co-signed the deed of surrender, also received smaller pensions.

Afterwards, 1.5 tons of gold, gilt and silver, from the treasures of the abbey, were delivered to the Tower of London. The site was granted to the King who later granted it to others, including William Petre, the Secretary of State, and Sir Thomas Dennis (c.1477-1561) of Holcombe Burnell in Devon, who had married Donne's sister Elizabeth and was Chamberlain of the Household to Cardinal Wolsey.

Following dissolution, the abbey site and its lands were granted by the crown to Sir Thomas Denys (c.1477-1561) of Holcombe Burnell, near Exeter, who stripped the buildings and "reduced them to ruins". The abbey site was subsequently used as a stone quarry.

In 1800, the site was purchased by local mill owner, Samuel Berry. Berry had the ruins demolished, constructing a Gothic style "castellated Tudor" mansion house, and a wool mill on the site in 1806. The Gothic house was constructed on the site of the abbey's former west cloister. The only pieces of the former abbey to escape demolition were some of the outer buildings - which were retained as farm buildings - and the tower from the former abbot's lodgings, the only part which remains to this day.

Over the next eighty years, the Buckfast site changed hands four times, finally falling into the hands of Dr. James Gale in 1872. Ten years later, Dr. Gale decided to sell the property, but was keen to offer it to a religious community. An advert was placed in The Tablet, describing the Abbey as "a grand acquisition could it be restored to its original purpose." Within six weeks of the sale, monks were again living at the abbey.

Most of Samuel Berry's house was remodeled and incorporated into new claustral ranges which were built in 1882. A temporary church was constructed to the south of these new buildings, with the current abbey church constructed between 1906 and 1938, mostly on the footprint of the Cistercian Abbey (the east-end does not follow the original plan). The new abbey church was built in the "Norman Transitional and Early English" styles, to the designs of architect, Frederick Arthur Walters. There were never more than six monks working on the project at any one time, although the whole community had repaired the ancient foundations up to ground level. Construction methods were primitive: wooden scaffolding was held together by ropes and no safety protection was worn by the monks. One monk fell 50 feet but survived; and three monks fell off a hoist without serious injury in 1931. Construction continued throughout World War I: some of the monks were of German nationality, but were not sent to an internment camp on condition that they remained confined to the Abbey grounds.

Buckfast was formally reinstated as an Abbey in 1902, and Boniface Natter - who died at sea in 1906, when the SS Sirio was shipwrecked - was blessed as the new abbot on 24 February 1903. His travelling companion Anscar Vonier became the next abbot and pledged to fulfill Natter's dying wish, namely to rebuild the abbey.

The abbey church was consecrated on 25 August 1932, but the building was not finished for several years: the last stone was laid in late 1937 and final works completed the following year.

The only portion of the medieval monastery which survives is the "much restored", former abbot's tower, which dates from 14th or 15th century. This was incorporated into the abbey's guesthouse, which was constructed during 1982 and 1994, when the abbey's precinct was rebuilt. The abbey's former well, which was located in the crypt of the former abbey and which may have dated from Saxon times, was destroyed when the new abbey was built. A church was erected and opened in March 1884. In that year, reconstruction of the south wing of the monastery began; it was intended to include a refectory and cloister.

It was not until 25 August 1932, after most of the building had been completed, that the Abbey Church was consecrated. Reconstruction of the tower was completed in July 1937 with painting completed the following December. In 1968 Dom Charles completed the huge east window in the Blessed Sacrament Chapel. Charles employed the technique known as dalle de verre in which tiles of coloured glass are chipped into shape and laid, like a mosaic, in a matrix of resin.

Buckfast receives many visitors; men are lodged in the guest house belonging to the monastery, and men and women in a restored building. Various tours are offered at the site. The hair shirt of Roman Catholic Saint Thomas More is now preserved at a side altar in the Abbey. In 2017, pipe organs were being installed inside the Abbey church; the work was expected to finish in October. 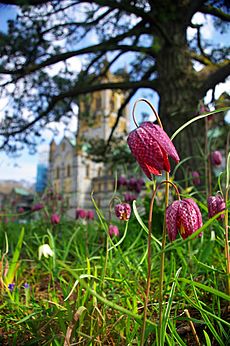 Fritillaria meleagris in the grounds of the abbey.

There is a conference and seminar centre, and a restaurant (the Grange). On the west side of the Abbey are two gardens with plants ranging from herbs used in cooking or medicine to poisonous plants. Behind the public area is an enclosed garden for the monks. A bridge leads over the river to the abbey farm.

The Abbey is self-supporting, with a farm where vegetables are grown and bees, pigs and cattle are kept, a shop which sells wine, honey beeswax, fudge and other items made by religious communities throughout the world, and a gift shop, book shop, and restaurant. 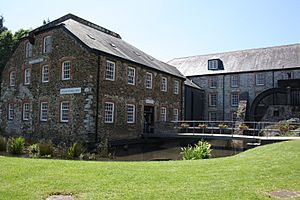 Brother Adam (born Karl Kehrle in 1898 in Germany, died in 1996) was put in charge of the Abbey's beekeeping in 1919, and began extensive breeding work creating the honeybee now known as the Buckfast bee. Brother Adam had to replenish the bee colonies as 30 of the monastery's 46 colonies had been wiped out by a disease known at the time as the Isle of Wight Disease, but later called "Acarine", all the bees that died were of the indigenous Old British Black bee (a now extinct British strain of the A. m. mellifera). The 16 hives that survived were of Italian Ligurian origin (A. m. ligustica). At the request of the government, Brother Adam helped in restocking the British Isles with his disease resistant Buckfast bees. Today the breeding of pedigree Buckfast bees is regulated by the Federation of European Buckfast Beekeepers (G.D.E.B.) in over twenty six countries with numerous breeders.

From 1967 until 1994, the abbey ran a prep school for boys aged 7 to 13, but was obliged to close it as the school became financially non-viable due to dwindling numbers of boarders.

With the outbreak of World War II, Plymouth-based St Boniface's Catholic College evacuated its pupils to Buckfast Abbey between 1941 and 1945. The school later named one of its Houses "Abbey" in memory of this period in their history.

School of the Annunciation

The School of the Annunciation was a place of learning for adults and was a charitable company based in the grounds of Buckfast Abbey. It was founded in 2014 by Dr Petroc Willey, Dr Andrew Beards, and Dr Caroline Farey, who had left the Maryvale Institute, with the Abbot of Buckfast. It offered distance learning, part-time programmes, summer schools and short courses in theology, philosophy, catechetics, sacred beauty, liturgy and other associated subjects to support the New Evangelisation. The School closed on 31 August 2019 due to a lack of funding.

The tower contains fifteen bells. There is a ring of twelve bells with a tenor weighing 41 long hundredweight (with two extra semi tone bells) surrounding the 7.5 ton bourdon bell called Hosanna. They are widely regarded by many as one of the finest sets of change ringing bells in the world. In August 2018, the Abbey hosted the Millennium Bell Ringing Festival in celebration of its 1000th year since the foundation of the monastery.

The bells were cast in 1935 by the founders John Taylor and Co. They were donated by a local benefactor. They are hung in the traditional change ringing style around the bourdon Hosanna. They also have an Ellacombe chiming apparatus but this is currently out of use. 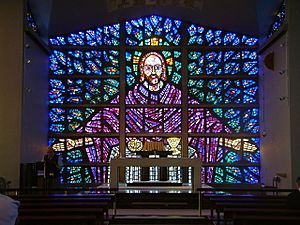 Stained glass in Buckfast Abbey. The panel, designed by the monks, is 8 metres (26 feet) across.

Buckfast still followed the Rule of St. Benedict, as the Cistercians also live by that Rule.

Monastic life was restored at Buckfast in 1882; it became an abbey, under the direction of an abbot, in 1902.

All content from Kiddle encyclopedia articles (including the article images and facts) can be freely used under Attribution-ShareAlike license, unless stated otherwise. Cite this article:
Buckfast Abbey Facts for Kids. Kiddle Encyclopedia.