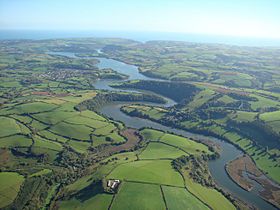 The River Dart is an English river in Devon. It rises on Dartmoor, and reaches the English Channel at Dartmouth. The Dart begins at Dartmeet where the separate rivers East Dart and West Dart flow into each other.

The river's name may be Celtic meaning 'river where oak trees grow'. The banks of the lower Dart are covered in ancient woods of native oak.

The East and West Dart are crossed by a number of "clapper bridges" which are big slabs of stone laid on the river bed. At Totnes the river becomes tidal, and there are no bridges below the town. 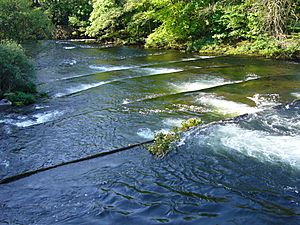 The Dart estuary is a large 'ria' (coastel inlet). It is popular for sailing. The entrance to the river from the sea is rocky with cliffs either side. On the East side Kingswear Castle sits very close to the water's edge, and on the west side Dartmouth Castle is built on a rocky promontory at sea level. The castles once operated a defensive chain across the estuary. It was raised at dusk to destroy enemy ships attempting to attack the harbour. The remains of the operating mechanisms for the chain are still visible in Dartmouth castle.

The lower section of the River Dart forms Dartmouth Harbour, a deep water natural harbour with a long history. It is still a busy port for local fishing boats and a variety of yachts and other private boats. Several local companies do shipbuilding and repairs to small tonnage craft.

All content from Kiddle encyclopedia articles (including the article images and facts) can be freely used under Attribution-ShareAlike license, unless stated otherwise. Cite this article:
River Dart Facts for Kids. Kiddle Encyclopedia.