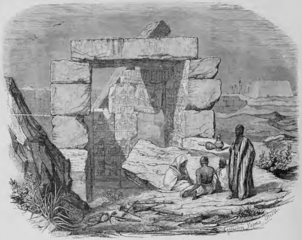 The Karnak king list, is a list of early Egyptian kings written in stone. It was in the southwest corner of the Festival Hall of Thutmose III. This hall was part of the Karnak Temple Complex, now Luxor, Egypt. It was written during the rule of Thutmose III. It has the names of 61 kings beginning with Sneferu from Egypt's Old Kingdom. Only the names of 39 kings can still be read. One name is not written in a cartouche (a border used around the name of a king).

It is not a complete list of the Egyptian Pharaohs. This list has the names of kings of the First and Second Intermediate periods, which are left out in most other king lists.

It was first described by James Burton in 1825. In 1843, a German group directed by egyptologist Karl Richard Lepsius was traveling up the River Nile to Karnak. A French adventurer, Émile Prisse d'Avennes, got there first. he pulled down the wall at night and took away the blocks with the lists. He had these blocks sent to France. Severely damaged, it is now on show at the Louvre in Paris. 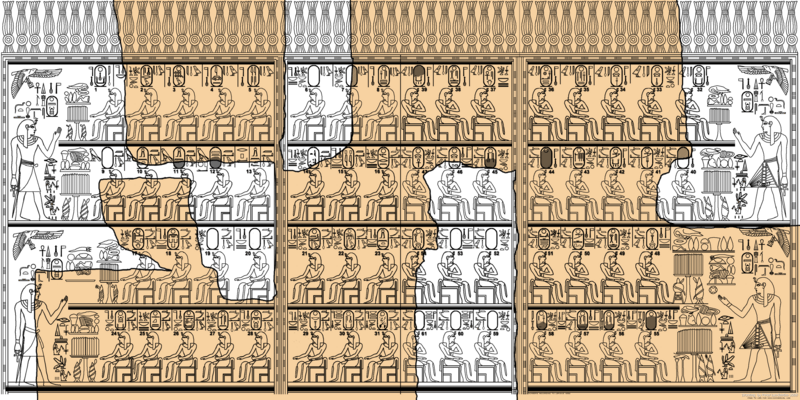 Drawing of the Karnak King List. The colored bits remain, the white are more or less lost.

This list has the name of the Pharaoh followed by the actual one written on the stone. The list is in three sections and is divided at the center. The numbering is from the sides, toward the center.

All content from Kiddle encyclopedia articles (including the article images and facts) can be freely used under Attribution-ShareAlike license, unless stated otherwise. Cite this article:
Karnak king list Facts for Kids. Kiddle Encyclopedia.