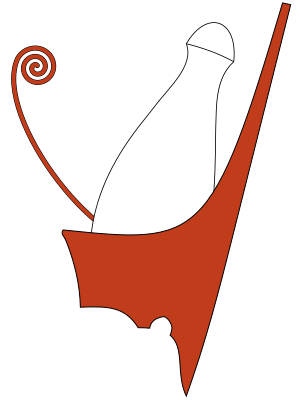 Pschent, the double crown of Egypt

The First Dynasty pharaoh Menes is said to have invented the Pschent. The first pharoah to be shown wearing the Double Crown was Djet, in a rock inscription showing his Horus wearing it. 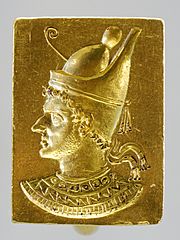 Ring of Ptolemy VI Philometor wearing the Pschent-Double Crown, 3rd to 2nd Century BC. Ptolemaic rulers only wore the Pschent in Egypt. They wore the diadem in the other territories

None of the Egyptian crowns have survived (or been found yet). Like the Deshret and the Hedjet Crowns, the Pschent is known only from statues, paintings, inscriptions, and ancient stories.

Among the gods shown wearing the Double Crown are Horus and Atum. These both represented the pharaoh or had a special relationship to the pharaoh.

All content from Kiddle encyclopedia articles (including the article images and facts) can be freely used under Attribution-ShareAlike license, unless stated otherwise. Cite this article:
Pschent Facts for Kids. Kiddle Encyclopedia.