The Ancient Egyptian royal titles were a standard way of naming the pharaohs, the kings of Ancient Egypt. These names and titles showed the king's worldly and religious powers. The names could provide a sort of mission statement for the king. Names and titles sometimes changed during the reign.

By the Middle Kingdom the pharaohs used a set of five titles. The full set of titles, the titulary, using the five names, became the standard and were still in use as late as the Roman Empire. 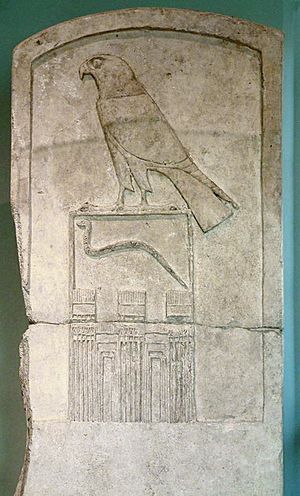 Serekh containing the name of Djet and an association with Wadjet, on display at the Louvre

The Horus name is the oldest form of the pharaoh's name. It began in the Predynastic Period. Many of the oldest-known Egyptian pharaohs were known only by this title.

The Horus name was usually written inside a serekh. This was a symbol of a palace façade. The name of the pharaoh was written in hieroglyphs inside the serekh. Usually there would be an image of the falcon God Horus on top or beside it.

One Egyptian ruler, the 2nd dynasty Seth-Peribsen, used an image of the god Seth instead of Horus. Perhaps this was showing there had been some kind of religious division within the country. He was succeeded by Khasekhemwy, who placed the symbols of both Set and Horus above his name. Later kings always had the image of Horus beside their name.

By the time of the New Kingdom the Horus name was often written without the enclosing serekh.

The Nebty name, meaning "two ladies", was linked with the goddesses of Upper and Lower Egypt:

The name is first definitively used by the First Dynasty pharaoh Semerkhet. It became an independent title by the Twelfth Dynasty.

The Nebty name was not usually framed by a cartouche or serekh. It always begins with the hieroglyphs of a vulture and cobra resting upon two baskets, the dual noun "nebty".

This was also known as the Golden Horus Name. The pharaoh's name featured the image of a Horus falcon perched above or beside the hieroglyph for gold.

The meaning of this title has been disputed. It could show the triumph of Horus over his uncle Seth, the symbol for gold meaning that Horus was "superior to his foes". Gold also was linked with ideas of eternity, so name may show the pharaoh's eternal Horus name.

Like the Nebty name, this name was not framed by a cartouche or serekh. 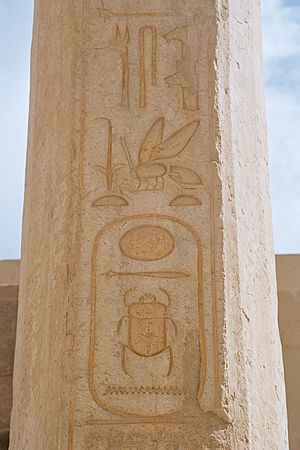 Praenomen of the Cartouche of Thutmose II preceded by Sedge and Bee symbols, Temple of Hatshepsut, Luxor

The pharaoh's throne name, the first of the two names written inside a cartouche, with the title nsw-bity (nesu-bity, nesw-bit, nswt-bjtj). It means "S/He of the Sedge and Bee". This is often translated as "King of Upper and of Lower Egypt", as the sedge and bee were symbols for Upper and Lower Egypt.

The term nsw-bity may be from the Berber word for "strong man; ruler".(Schneider 1993)

The epithet neb tawy, "Lord of the Two Lands", meaning the valley and delta regions of Egypt was also often used.

This was the name given to the pharaoh at birth. The name itself was preceded by the title "Son of Ra". This was written with the hieroglyph of a duck (za), a homonym for the word meaning "son" (za), next to an image of the sun, a hieroglyph god Ra. It was first introduced to the set of royal titles in the Fourth Dynasty and emphasizes the king's role as a representative of the solar god Ra. When the pharaoh was woman, the preceding title was interpreted as "daughter".

Modern historians usually use this name for the ancient kings of Egypt, adding ordinals (e.g. "II", "III") for different individuals with the same name.

Examples of the full titulary

In the Middle Kingdom, the full titulary was sometimes written in a single cartouche. This example is from Senusret I, from Beni Hasan.

The full titulary of Eighteenth Dynasty pharaoh Hatshepsut. This has a guide to pronunciation and the meanings, and shows the differences when the pharaoh is a woman:

The full titulary of Eighteenth Dynasty pharaoh Thutmose III, with a guide to pronunciation and meaning:

All content from Kiddle encyclopedia articles (including the article images and facts) can be freely used under Attribution-ShareAlike license, unless stated otherwise. Cite this article:
Ancient Egyptian royal titles Facts for Kids. Kiddle Encyclopedia.