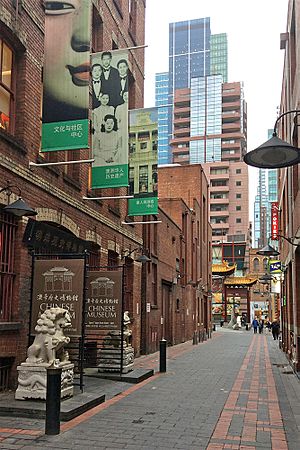 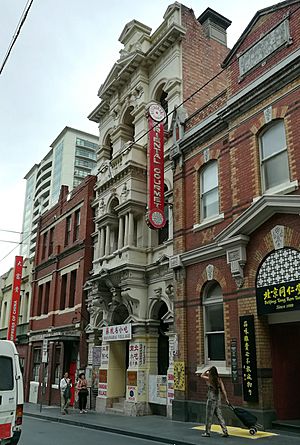 Built in 1887, the Sum Kum Lee building is an example of Victorian architecture using Chinese motifs.

Chinatown (Chinese: 墨爾本華埠) is an ethnic enclave in the Central Business District (CBD) of Melbourne, Victoria, Australia. Centred at the eastern end of Little Bourke Street, it extends between the corners of Swanston and Spring Streets, and consists of numerous laneways, alleys and arcades. Established in the 1850s during the Victorian gold rush, it is notable for being the longest continuous Chinese settlement in the Western World and the oldest Chinatown in the Southern Hemisphere.

Melbourne's Chinatown has played an important role in establishing the culture of Chinese immigrants in Australia, and is still home to many Chinese restaurants, cultural venues, businesses and places of worship. Today, Melbourne's Chinatown is a major tourist attraction, known for its architectural heritage, annual festivals and cuisines of Chinese, Thai, Japanese, Indian, Malaysian, Vietnamese and Korean origins.

Beyond Chinatown and the CBD, Melbourne's Chinese community is well-represented in other areas of the city, most notably Box Hill, where a $450 million development named "New Chinatown" is currently being constructed.

Chinatown is home to the Chinese Museum. 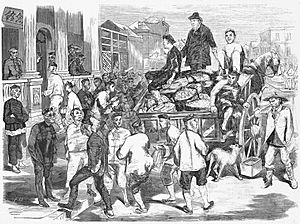 Melbourne's Chinatown has a long and illustrious history. It was established during the Victorian gold rush in 1851 when Chinese prospectors came to Australia for the gold rush in search of gold. In late 1854, the first Chinese lodging houses were created in Little Bourke Street and Celestial Avenue (off Little Bourke Street). This particular location was considered convenient for the immigrants, as it was a staging post for new Chinese immigrants as well as supplies en route to the goldfields. It is notable for being the oldest Chinatown in Australia, the oldest continuous Chinese settlement in Australia, and the longest continuous Chinese settlement in the western world, only because San Francisco's Chinatown was destroyed by the 1906 earthquake. The gold rush eventually waned, causing a shift from rural living and an influx of people migrating into metropolitan Melbourne, particularly Little Bourke Street, which already had a predominantly Chinese population. 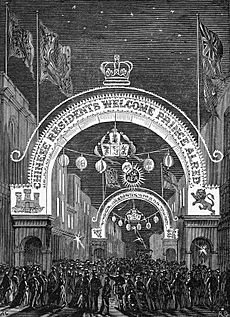 Chinatown illuminated at night with decorations welcoming the arrival of Prince Alfred, 1867

The Chinese established themselves as storekeepers, importers, furniture-makers, herbalists and in the wholesale fruit and vegetable and restaurant industries. Christian churches were built and Chinese political groups and newspapers were subsequently formed. Other members of the Chinese community who lived and worked elsewhere used Chinatown to congregate with friends. The area also provided further support to new Chinese immigrants. Early in its history, during a thriving period in the 1850s, Chinatown housed "salubrious" enterprises including opium dens and boarding houses, but maintained a distinctly "entrepreneurial air". By 1859, Victoria's Chinese population reached approximately 45,000, representing nearly 8.5% of the colony's total population.

One-half of Little Bourke-street is not Melbourne but China. It is as though some djinn or genie had taken up a handful of houses from the middle of one of the Celestial cities, and flung them down, inhabitants and all, in the Antipodes. One almost expects to behold the princess on her way to the bath, or to meet that mighty potentate the brother to the sun, uncle to the moon, and first cousin to the seven stars.

During the colonial period, several businesses run by Australians of European descent were based in Chinatown, including the offices of Table Talk, for a time in the 1880s one of Melbourne's most popular magazines.

Chinatown peaked in the early 20th century in terms of population and activity, which was hampered by the 1901 Immigration Restriction Act and a general shift of businesses and residents from the Melbourne's central business district (CBD). The Dim Sim was invented in Chinatown, by William Wing Young, in 1945, at his restaurant Wing Lee, and has become a major snack food in takeaway outlets and Chinese restaurants throughout the entire country. European residents of Melbourne and university students of the city began frequenting Chinatown eateries in the 1930s, leading to gradual mainstream Australian popularity which boomed in the 1960s–70s. This boom was further enlarged by the redevelopment of Little Bourke Street at the request of Chinatown entrepreneur David Neng-Hsiang Wang, leading to the archways of today. 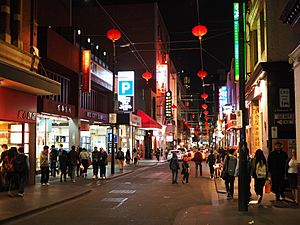 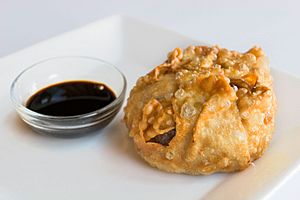 The dim sim, a popular example of Australian Chinese cuisine, originated in Chinatown

The Southern Chinese people (who first settled in Melbourne) were the first Chinese Australians to bring Chinese cuisine to Australia, although recently more Northern Chinese food has become common. Chinese food was the first international cuisine to become popular through the take away food market in Australia. The 1970s and 80's also saw the eradication of the controversial discriminatory immigration regulations, which saw immigration from Indochina, Singapore, Malaysia, Taiwan, Hong Kong and the People's Republic of China. In 2010, the ground floor of the Chinese Museum was remodeled as a visitor centre for Melbourne's Chinatown. In 2011, a Memorial statue of Dr Sun Yat-sen was unveiled outside the Museum's entrance in celebration of the 100th anniversary of the founding of the Republic of China. The traditional Chinese New Year Lion Dance has always ended at this spot, but will now end with a blessing of the statue. 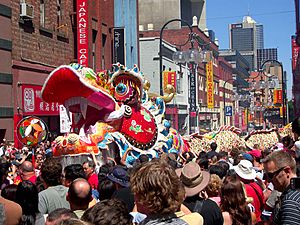 The Chinese New Year is primarily celebrated in Chinatown on the first Sunday of the new Lunar year. It is the original and primary location of Melbourne's CNY festival, although the festival has expanded to multiple CBD sites in recent years, including Crown Casino. The celebrations feature traditional and contemporary Chinese cultural activities and festivities, dances, Chinese opera and singing, karaoke competition, numerous stalls of culinary delights, arts and crafts, Chinese chess competitions, calligraphy and children's events. 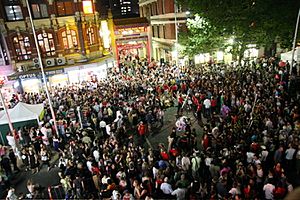 The Dai Loong Dragon Parade, as well as the main Lion Dances (performed by the Chinese Youth Society of Melbourne, Chinese Masonic Society and Hung Gar Martial Arts School) begin at roughly 10am on the Sunday following New Year, and run till roughly 4pm. The Dragon parade begins and ends at Melbourne's Chinese Museum.

The Asian food festival is typically held in Spring and celebrates Asian cuisine with food tasting, stalls, cooking demonstrations, among others.

Beyond the original Chinatown in the CBD, several newer Chinese communities have developed in Melbourne's eastern suburbs, such as Box Hill, Glen Waverley and Springvale.

An older community, with links back to the 1850s gold rush, is to be found in the regional city of Bendigo, 150 km north-west of Melbourne.

Tom Roberts, one of the leading figures of Australian Impressionism, created sketches of life in Little Bourke Street in the 1880s. During the Second World War, modernist Eric Thake created a series of works depicting Chinatown shopfronts, which now belong in the State Library of Victoria's painting collection.

Fergus Hume's The Mystery of a Hansom Cab (1886), one of the most famous mystery crime novels of the Victorian era, is based largely on the author's observations of life in Little Bourke Street, including the "dark recesses" of the Chinese Quarter, where Detective Kilsip, the novel's protagonist, pursues his suspect. Alfred Dampier's Marvellous Melbourne play of the same year features a scene in a Chinatown opium den.

Set in Little Bourke Street, Elinor Mordaunt's 1919 novel The Ginger Jar is about a love affair between a Chinese Australian hawker and a European woman.

A pivotal scene of the 1911 silent film The Double Event, directed by W. J. Lincoln, takes place in Melbourne's Chinatown. 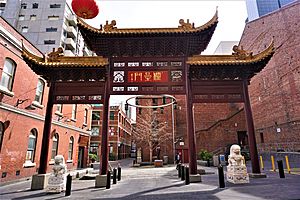 All content from Kiddle encyclopedia articles (including the article images and facts) can be freely used under Attribution-ShareAlike license, unless stated otherwise. Cite this article:
Chinatown, Melbourne Facts for Kids. Kiddle Encyclopedia.