Chinatown is an area of Liverpool that is an ethnic enclave home to the oldest Chinese community in Europe. Located in the south of the city centre, Chinatown has many Chinese businesses, such as Chinese restaurants and supermarkets, and facilities for the Chinese community. The area is also notable for its Chinese-style architecture; with the paifang on Nelson Street being the largest, multiple-span arch of its kind outside China.

The first presence of Chinese people in Liverpool dates back to 1834 when the first vessel direct from China arrived in Liverpool's docks to trade such goods as silk and cotton wool. Many Chinese immigrants first arrived in Liverpool in the late 1860s as a result of Alfred Holt and Company employing large numbers of Chinese seamen while establishing the Blue Funnel Shipping Line. The commercial shipping line created strong trade links between the cities of Shanghai, Hong Kong and Liverpool; mainly importing silk, cotton and tea. From the 1890s onwards, small numbers of Chinese began to set up businesses catering to the Chinese sailors working on Holt's lines and others. Some of these men married working class British women, resulting in a number of British-born Eurasian Chinese being born in Liverpool.

At the beginning of World War II, there were up to 20,000 Chinese mariners in the city. In 1942, there was a strike for rights and pay equal to that of white mariners. The strike had lasted for four months. For the duration of the War these men were labelled as "troublemakers" by the shipowners and the British Government. At the end of the conflict, they were forbidden shore jobs, their pay was cut by two-thirds and they were offered only one-way voyages back to China. Hundreds of men were forced to leave their families, with many of their Eurasian children continuing to live in and around Liverpool's Chinatown to this day.

Liverpool's first Chinatown existed within the city's docklands, although heavy bombing during World War II led to a relocation to the current spot just west of Liverpool Cathedral. 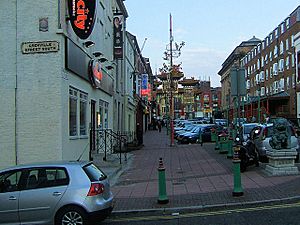 The Chinese Arch was assembled in 2000 (after being built in one of Liverpool's twin cities - Shanghai) as a mark of redevelopment of the area, which is still continuing today.

Plans to redevelop a significant portion of Chinatown were revealed in October 2010 and April 2012 respectively. One scheme named 'China Square' is to include a Chinese Cultural Museum and Courtyard by Marriott in the former Scandinavian Hotel building. Another regeneration project tipped to take place is 'Shanghai Square', which is built will occupy the southern fringes of Chinatown. The proposal includes building a 23,000 m2 (250,000 sq ft) trade centre that will provide space for up to 100 businesses, specialist accommodation for Chinese students as well as a large Asian Pacific food market.

The Chinatown in Liverpool, England is located near the city centre's southern edge close to Liverpool Cathedral. The city's Chinatown district has spread significantly since its first establishment, now taking up much of Berry Street. The streets of Liverpool's Chinatown are decorated with Chinese-style lanterns, waste bins and all street signs are written in English and Chinese.

2007 estimates state 1.7% of Liverpool's population as being of full Chinese descent (some 7,400 people), making it the city's single largest non-White ethnic group. The International Organization for Migration, by contrast, has estimated that the number of Chinese people in Liverpool could range between 25,000 and 35,000. There is also a large number of Chinese Liverpudlians of mixed European and Chinese ethnicity, descendants of the earlier generations of Chinese settlers in the city. 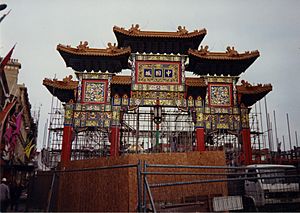 Chinatown Arch in 2000 during the last stage of construction

Planning for an arch began in 1992 as part of a regeneration scheme by Liverpool City Council for the Chinatown area, designs for the arch were chosen by the local Chinese community through a competition.

Initial construction began in October 1999 with the arrival of 20 specially selected craftmen from Liverpool's twin city of Shanghai. The craftsmen included stonemasons, stone carvers, painters and construction engineers. Along with the Chinese workers, block components manufactured by The Shanghai Linyi Garden Company Ltd where also shipped from China to Liverpool in five large containers with 2,000 pieces. Overall design was co-ordinated through the architectural practice of Wilkinson Hindle Hallsall and Lloyd with Liverpool City Council providing engineering design and supervision of the infrastructure and structural frame to the arch. Work finished in a relatively short time period of 90 days. This was due to the Chinese workers not traditionally celebrating Christmas and Boxing Day meaning that they could carry on working. Building of the arch finished in 2000 and was officially opened on Chinese New Year at a final cost of £700,000.

Standing at 13.5 metres (44 ft) high the arch is the tallest in Europe and the second tallest in any Chinatown outside of mainland China. (Washington D.C having the tallest outside China at 47 ft.) The arch boasts 200 hand carved dragons of which 188 are ordinary and 12 are pregnant, the meaning of which is to symbolize good fortune between Liverpool and Shanghai. The word "Chinatown" (trad. Chinese: 中國城; pinyin: zhōngguóchéng) is written on the centre of the arch from right-to-left using traditional Chinese characters. In 2010 as part of a £25,000 lighting scheme, multicoloured, low energy illuminating lights were added to the arch as a way to highlight one of Liverpool's significant structures.

Chinese owned restaurants, supermarkets (including Chung Wah and Hondo), book shops and other businesses are now spread throughout the district. The large and increasing Chinese student population has seen the growth of a new network of businesses catering to the needs of Mainland Chinese students, building upon the existing Chinatown in the city. 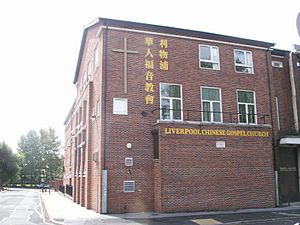 All content from Kiddle encyclopedia articles (including the article images and facts) can be freely used under Attribution-ShareAlike license, unless stated otherwise. Cite this article:
Chinatown, Liverpool Facts for Kids. Kiddle Encyclopedia.