Chinatown in Vancouver, British Columbia, is Canada's largest Chinatown. Centred on Pender Street, it is surrounded by Gastown and the Downtown financial and central business districts to the west, the Downtown Eastside to the north, the remnant of old Japantown to the northeast, and the residential neighbourhood of Strathcona to the east.

Chinatown remains a popular tourist attraction and is one of the largest historic Chinatowns in North America. However, it experienced decline as newer members of Vancouver's Cantonese Chinese community dispersed to other parts of the metropolitan area.

Due to the large ethnic Chinese presence in Vancouver—especially represented by multi-generation Chinese Canadians and first-generation immigrants from Hong Kong—the city has been referred to as "Hongcouver". However, in recent years, most immigration has been from Mainland China.

The approximate borders of Chinatown as designated by the City of Vancouver are the alley between Pender and Hastings Streets, Georgia Street, Gore Avenue, and Taylor Street, although unofficially the area extends well into the rest of the Downtown Eastside. Main, Pender, and Keefer Streets are the principal areas of commercial activity.

It has been more recently overshadowed by the newer Chinese immigrant business district along No. 3 Road in the City of Richmond, south of Vancouver. Many affluent Hong Kong and Taiwanese immigrants have moved there since the late 1980s, coinciding with the increase of Chinese ethnic retail and restaurants in that area. This new area is designated the "Golden Village" by the City of Richmond. The proposed renaming of the area to "Chinatown" met resistance both from merchants in Vancouver's Chinatown and from non-Chinese residents and merchants in Richmond itself. 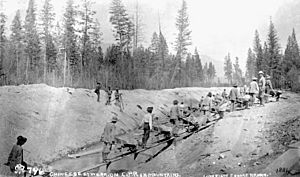 After the completion of the railroad, under the Chinese Immigration Act of 1885, a head tax of CA$50 per person was levied solely on Chinese immigrants to discourage further settlement; the head tax was raised to $100 in 1900 and then $500 in 1903.

By 1900, Chinatown covered the four square blocks bounded by Canton Alley (on the west), Hastings Street (on the north), Keefer Street (on the south), and Main Street (on the east, named Westminster Avenue at the time), with Pender Street (then called Dupont) as the main commercial district. In 1896, the health officer for the City of Vancouver reported the city had to destroy houses in Chinatown "owing to their filthy condition" and that "one could hardly pass through the [Chinatown] quarter without holding one's nose." Another health officer noted "The Chinese merchants and employers of labour endeavour to assist the health officials, and are, as a rule, willing to co-operate and help in this matter, but the lower classes of Chinese emigrants give a great deal of trouble unless constantly watched," concluding that continued immigration would lead to "circumstances and conditions which predispose to infectious disease, and serve to spread it rapidly when once it is roused into activity." This perception only worsened with the turn of the district. As these perceptions grew, the discrimination turned to violence, resulting in a destructive raid in 1907 that caused irreversible damage to the area. 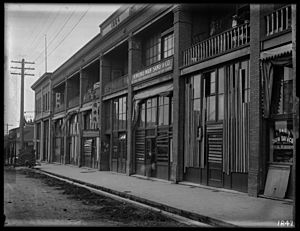 As more people of Chinese heritage came to Vancouver, clan associations were formed to help the newcomers assimilate in their adopted homeland and to provide friendship and support. Clan societies were often formed around a shared surname lineage, county (e.g., Kaiping, Zhongshan), or other feature of identity.

Despite these efforts, discrimination against residents of the area continued to grow and eventually turned to violence. The Vancouver riots of September 1907 grew out of an anti-immigration rally being held by the Asiatic Exclusion League, resulting in significant damage to Chinatown businesses. 2,000 Chinese immigrants were displaced from their homes, and total property damage resulting from the actions of the mob of 10,000 was estimated at $15,000. One news report speculated the riot was held to intimidate a visiting Japanese delegate. Another blamed the presence of American agitators. Mackenzie King, then the Deputy Minister of Labour, was dispatched to investigate the riot and recommended the disbursement of $36,000 in compensation.

The head tax was repealed via the Chinese Immigration Act of 1923, which instead abolished Chinese immigration to Canada entirely, except in limited circumstances.

In 1979, the Chinatown Historic Area Planning Committee sponsored a streetscape improvement program to add various Chinese-style elements to the area, such as specially paved sidewalks and red dragon streetlamps that demarcated the area's borders while emphasizing it as a destination for heritage tourism. Starting with its designation by the province as a historic area in 1971 and subsequent economic shifts, Chinatown shifted from a central business district to playing a largely cultural role. Murality, a local non-profit, is installing a mural on East Pender Street with the aim of bringing colour and vitality to the neighbourhood.

The growth of Chinatown during much of the 20th century created a healthy, robust community that gradually became an aging one as many Chinese immigrants no longer lived nearby. Noticing local businesses suffering, the Chinatown Merchants Association cited the lack of parking and restrictive heritage district rules as impediments to new uses and renovations. Their concerns subsequently led to a relaxation of zoning laws to allow for a wider range of uses, including necessary demolition. Additions in the mid-1990s included a large parkade, a shopping mall, and the largest Chinese restaurant in Canada. More residential projects around the community and a lowering of property taxes helped to maintain a more rounded community. Reinvigoration was a discussed topic along government members, symbolically embedded in the Millennium Gate project, which opened in 2002. It can be argued that the role of the early Chinese settlers in Vancouver's Chinatown area in the late 19th and early 20th centuries helped to put Vancouver on the global map as a popular destination for Asian investment and immigration. 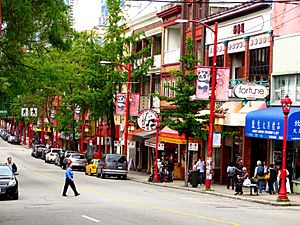 In addition to Han Chinese from Taiwan, Hong Kong, and Mainland China, Chinese Latin Americans have also settled in the Chinatown area. Most of them were from Peru and arrived shortly after Juan Velasco Alvarado took over that country in a military coup in 1968. Others have come from Argentina, Brazil, Mexico, and Nicaragua.

Vancouver experienced large numbers of immigrants from the Asia-Pacific region in the last two decades of the twentieth century, most notably from China, whose population in the Vancouver Census Metropolitan Area was estimated at 300,000 in the mid-1990s. A significant development since the 1980s has been the increase of transnational awareness among the Chinese. The heightened mobility of capital, information, people, and commodities across territorial boundaries and distance challenged the traditional meaning of migration.

Compared to Chinatown itself, more Chinese immigrants have settled in Richmond, drawn by its lower house prices, considerable concentration of Chinese retailers, and the nearby Vancouver airport. The business heart of Chinatown was visibly affected after the arrival of suburban Asian shopping districts, such as Richmond's Aberdeen Centre, which was promoted as North America's largest enclosed Asian mall, was near other Chinese shopping centres, and which offered more parking and open space than historic Chinatown.

For more details, see List of heritage buildings in Vancouver

The neighbourhood was designated a National Historic Site of Canada in 2011.

Ongoing efforts at revitalization include efforts by the business community to improve safety by hiring private security, considering new marketing promotions, and introducing residential units into the neighbourhood by restoring and renovating heritage buildings. The current focus is on the restoration and adaptive reuse of the distinctive association buildings.

The China Gate (next to the Chinese Cultural Centre, near the intersection with Carrall) facing Pender Street was donated to the City of Vancouver by the Government of the People's Republic of China following the Expo 86 world's fair, where it was on display. After being displayed for almost 20 years at its current location, the gate was rebuilt and received a major renovation of its façade employing stone and steel. Funding for the renovation came from government and private sources; the renovated gate was unveiled during the October 2005 visit of Guangdong governor Huang Huahua.

This is not to be confused with the larger Millennium Gate, which straddles Pender Street at the west end of Chinatown, near the intersection with Taylor Street. The Millennium Gate was approved on September 20, 2001, and erected in 2002 at the same site as a temporary wooden arch built to celebrate the 1901 royal tour by the Duke and Duchess of Cornwall and York. Joe Y. Wai designed the Millennium Gate.

The Sam Kee Company, run by Chang Toy, one of the wealthier merchants in turn-of-the-20th-century Chinatown, bought the land for the Sam Kee Building as a standard-sized lot in 1903. However, in 1912 the city widened Pender Street, expropriating all but 6 feet of the Pender Street side of the lot. This lot was the previous home to Shanghai Alley. In 1913 the architects Brown and Gillam designed this narrow, steel-framed free-standing building on the remaining 6-foot strip. The basement, extending under the sidewalk and much wider than the rest of the building, housed public baths, with shops on the ground floor and offices above (such basements in Vancouver were once common and zoned as "areaways"). The 1980s' rehabilitation of the building for Jack Chow was designed by Soren Rasmussen Architect and completed in 1986. 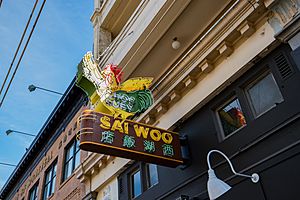 Chinatown was once known for its neon signs, but like the rest of the city, lost many signs to changing times and a sign bylaw passed in 1974. The last of these was the Ho Ho sign (which showed a rice bowl and chop sticks), which was removed in 1997.

A large 45 ft (14 m) tall neon sign was approved for the Chinatown Plaza parkade project in 2008 under the City of Vancouver's Great Beginnings initiative. The new sign was installed in March 2010.

In 2017, a neon sign featuring a large green and yellow-coloured rooster for the Sai Woo Restaurant was installed on Pender Street. The new owner of the Sai Woo was made aware of the original sign that hung outside the earlier incarnation of the restaurant (1925–59) from a one-second clip from a movie of a 1958 parade in Chinatown, and launched a search for the original sign which was unsuccessful. The sign was recreated from the archived footage. At the same time, plans were announced to relight the tall Ho Ho sign in 2018 or 2019. 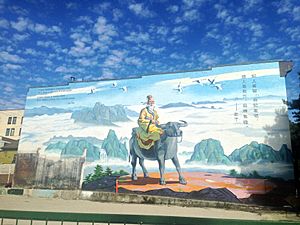 The mural depicts Chinese philosopher Laozi, sitting on the back of an ox, looking ahead with a serene expression.It features a saying from Laozi, in Simplified Chinese, along with an English translation: "It takes knowledge to understand others, but it needs a clear mind to know oneself. It takes strength to surpass others, but it requires a strong will to surpass oneself."

Vancouver's Laozi (also referred to "Lao Tzu" and "Lao Tsu", 老子) mural is located on the Western wall of the Lee's Association building, at the corner of Gore Avenue and Pender Street, on the boundary of Chinatown. The mural was unveiled on October 2, 2010, by the Mayor of the City of Vancouver, Gregor Robertson. as part of the celebration of the 125 years of Vancouver's Chinatown. The mural is featured in multiple lists of notable Vancouver murals.

It was designed by Kenson Seto and painted by Alex Li & Falk. The mural is 223 square metres, and cost $18,000 which was split between the City of Vancouver and Lee's Association of Vancouver. It was defaced multiple times by graffiti, causing outrage in the community.

On April 5, 2016, the City of Vancouver rezoned the lot at 303 E Pender St/450 Gore Avenue, allowing construction of a six story building that hid the mural from sight. The building, marketed as Brixton Flats was designed by architect Gair Williamson and developed by GMC Projects Inc., whose website features an image of the Laozi mural

Vancouver City Council added a condition to the rezoning:

"Design development to create a new mural to reflect the character and history of Chinatown;

The developer is studying the possibility of painting a smaller version of the original mural on the new building.

All content from Kiddle encyclopedia articles (including the article images and facts) can be freely used under Attribution-ShareAlike license, unless stated otherwise. Cite this article:
Chinatown, Vancouver Facts for Kids. Kiddle Encyclopedia.