President of the Republic of China facts for kids

The President of the Republic of China is the head of state of the Republic of China. Since 1996, the President is directly elected by plurality voting to a four-year term, with at most one re-election. The incumbent, Tsai Ing-wen, succeeded Ma Ying-jeou on 20 May 2016 as the first female president in the state's history. Originally established in Nanking in 1912, the government and its president relocated to Taipei in 1949 after losing the Chinese Civil War. 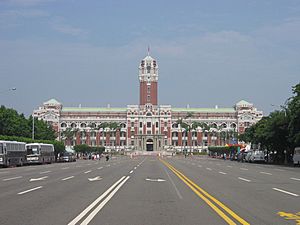 The Presidential Building in Zhongzheng District, Taipei houses the office of the ROC President currently. 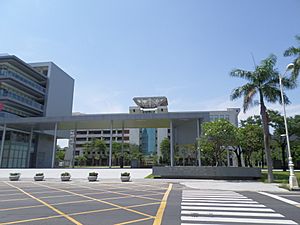 The Constitution names the president as head of state and commander-in-chief of the Republic of China Armed Forces (formerly known as the National Revolutionary Army). The president is responsible for conducting foreign relations, such as concluding treaties, declaring war, and making peace. The president must promulgate all laws and has no right to veto. Other powers of the president include granting amnesty, pardon or clemency, declaring martial law, and conferring honors and decorations.

The President can appoint Senior Advisors (資政), National Policy Advisors (國策顧問) and Strategy Advisors (戰略顧問), but they do not form a council.

The Constitution does not clearly define whether the president is more powerful than the premier, as it names the Executive Yuan (headed by the premier) as the "highest administrative authority" with oversight over domestic matters while giving the president powers as commander-in-chief of the military and authority over foreign affairs. Prior to his election as president in 1948, Chiang Kai-shek had insisted that he be premier under the new Constitution, while allowing the president (to which Chiang nominated Hu Shih) be a mere figurehead. However, the National Assembly overwhelmingly supported Chiang as president and once in this position, Chiang continued to exercise vast prerogatives as leader and the premiership served to execute policy, not make it. Thus, until the 1980s power in the Republic of China was personalized rather than institutionalized which meant that the power of the president depended largely on who occupied the office. For example, during the tenure of Yen Chia-kan, the office was largely ceremonial with real power in the hands of Premier Chiang Ching-Kuo, and power switched back to the presidency when Chiang became president. After President Lee Teng-hui succeeded Chiang as president in 1988, the power struggle within the KMT extended to the constitutional debate over the relationship between the president and the premier. The first three premiers under Lee, Yu Kuo-hwa, Lee Huan, and Hau Pei-tsun were mainlanders who had initially opposed Lee's ascension to power. The appointment of Lee and Hau were compromises by President Lee to placate conservatives in the KMT. The subsequent appointment of the first native Taiwanese premier Lien Chan was taken as a sign of Lee's consolidation of power. Moreover, during this time, the power of the premier to approve the president's appointments and the power of the Legislative Yuan to confirm the president's choice of premier was removed establishing the president as the more powerful position of the two.

After the 2000 election of Chen Shui-bian as president, the presidency and the Legislative Yuan were controlled by different parties which brought forth a number of latent constitutional issues such as the role of the legislature in appointing and dismissing a premier, the right of the president to call a special session of the legislature, and who has the power to call a referendum. Most of these issues have been resolved through inter-party negotiations. 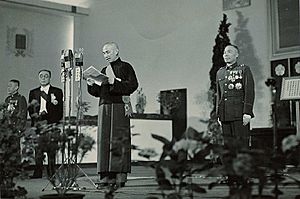 Generalissimo Chiang Kai-shek and Army General Li Tsung-jen were elected by the National Assembly to be the first-term president and vice president on 20 May 1948.

The Constitution of the Republic of China gives a short list of persons who will succeed to the presidency if the office were to fall vacant. According to the Additional Articles of the Constitution, Article 2:

Should the office of the vice president become vacant, the president shall nominate a candidate(s) within three months, and the Legislative Yuan shall elect a new vice president, who shall serve the remainder of the original term until its expiration.

Assuming that the vice president of the Executive Yuan would be third in line for the presidency, the current line of succession is:

Presidential succession has occurred three times under the 1947 Constitution: 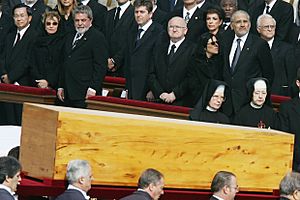 At the funeral of Pope John Paul II, President Chen Shui-bian (far left), whom the Holy See recognized as the head of state of China, was seated in the front row (in French alphabetical order) beside the first lady and president of Brazil. 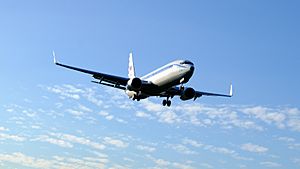 Air Force 3701, the presidential aircraft of the Republic of China.

The diplomatic protocol regarding the President of the ROC is rather complex because of the political status of Taiwan. In the 16 nations which recognize the ROC as the legitimate government of China, she is accorded the standard treatment that is given to a head of state. In other nations, she is formally a private citizen, although even in these cases, travel usually meets with strong objections from the People's Republic of China.

The President of ROC has traveled several times to the United States, formally in transit to and from Central America, where a number of countries do recognize the ROC. This system allows the President to visit the United States without the U.S. State Department having to issue a visa. During these trips, the President is not formally treated as a head of state, does not meet U.S. government officials in their official capacities and does not visit Washington, D.C. However, in these visits, the ROC President invariably meets with staff members from the US government, although these visits are with lower-ranking officials in non-governmental surroundings.

In the area of Southeast Asia, the ROC President was able to arrange visits in the early 1990s which were formally private tourist visits, however these have become increasingly infrequent as a result of PRC pressure.

At the annual Asia-Pacific Economic Cooperation leaders' summit, the ROC President is forbidden from attending personally and must send a special envoy to represent him or her at the event.

However, on December 2, 2016, U.S. President-elect Donald Trump accepted a congratulatory telephone call from the ROC President, a clear break from prior protocol.

The PRC media does not use the terms "President of Taiwan" nor "President of the Republic of China", which could be inferred as implying recognition of Taiwan as a country, or of Two Chinas. Hence, the term "Leader of the Taiwan Area" is used- with "Area" to show that Taiwan is not a country; while "Leader" does not equal "President". According to criteria set by the authorities in Beijing, media in mainland China generally are not allowed to use terms related to the Republic of China to describe the Taiwan authorities. But if the official title cannot be avoided in a news article, quotation marks would be used around terms for all official ROC positions and organisations, e.g. "President of the Republic of China"; "Presidential Office Building" to imply non-recognition.

As of August 2019, there are three living former Presidents:

All content from Kiddle encyclopedia articles (including the article images and facts) can be freely used under Attribution-ShareAlike license, unless stated otherwise. Cite this article:
President of the Republic of China Facts for Kids. Kiddle Encyclopedia.