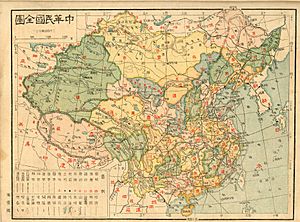 A ROC Map, printed in 1926, which showed Taiwan as part of Japan.

The political status of Taiwan is a difficult situation that many people disagree about. There are two countries in the world that call themselves China. The People's Republic of China (PRC) is the country most people think of when they hear the name China. The Republic of China (ROC) also calls itself China. It is better known in most of the world as Taiwan.

Taiwan was a part of China from the late 1600s. After the First Sino-Japanese War, Taiwan and Penghu were given to Japan by China. After World War II, the Japanese on Taiwan surrendered to the Chinese. This gave Taiwan back to the Chinese. After losing a civil war in 1949, the ROC government fled to the island of Taiwan. It took control of Taiwan and several nearby islands. The PRC controlled mainland China. It also said it owns the island of Taiwan (which is also known as Taiwan province) and the other islands. The ROC said that it was the rightful government of China and it included all of China, including Taiwan and Mongolia. In 1971, the ROC lost its United Nations seat as China. The seat was given to the PRC instead. This made the PRC the rightful government of China internationally. Most countries have accepted the PRC as the leaders of China. Several countries, including the United States, have been careful to not say officially which parts of the original China are part of the PRC. 23 countries have official diplomatic relations with Taiwan. Nearly all of the other countries still have some diplomatic relations with them. The major problems are about whether Taiwan is a still part of the PRC or should be an independent country.

People who live in Taiwan have different ideas, and it is difficult to find out what most people believe because small changes in how polls are worded can change the results a lot. Taiwan has not been ruled by mainland China since 1895. Today, Taiwan is a democracy. China is ruled by a communist government. The idea of freedom in communism is different than how people in a democracy think freedom should be. Few people in Taiwan want to become part of Communist China. Almost none want to give up their idea of freedom. Some people in Taiwan want Taiwan to formally become the Republic of Taiwan, an independent country. Most of the people in Taiwan want to keep everything like it is now. They want to wait for the best time to become the Republic of Taiwan.

Views by other countries

Today, most countries of the world see the PRC as China. Most countries however still have a very close economic and cultural relationship with Taiwan, even if they have major tensions with the PRC.

The relations between the PRC and Taiwan are tense. The PRC believes that Taiwan is a part of the PRC. The government of the PRC has said that if the people of Taiwan vote to become the Republic of Taiwan, that they will invade Taiwan and stop this from happening. In March of 2004, they passed a law that will allow China to invade Taiwan if Taiwan tries to leave the PRC and become an independent country. This law has caused problems with the people in Taiwan. It has caused even more people in Taiwan not to want to be a part of PRC China.

All content from Kiddle encyclopedia articles (including the article images and facts) can be freely used under Attribution-ShareAlike license, unless stated otherwise. Cite this article:
Political status of Taiwan Facts for Kids. Kiddle Encyclopedia.