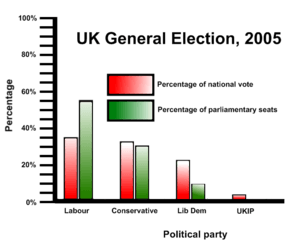 A graph showing the difference between the popular vote and the number of seats won by major political parties at the United Kingdom general election, 2005

Plurality voting is the most common method for electing representatives in the United States and some other countries. Voters vote for one candidate, and the candidate with the most votes wins.

Political parties often use a primary in order to avoid splitting their party vote in a general election. For example, if 60% of the voters are Republican, and 40% Democrat, but two Republicans run for the same office and each get 30% of the vote, the Democrat would win with 40%, since that is the most votes, even if 60% of voters least preferred the Democrat.

If more than two candidates are on the general election ballot, voters often compromise vote an acceptable candidate whom they think has a chance of winning.

Opponents of plurality voting argue that the media has too much power since they tell people which of the two has a chance and that voting for a third candidate is in effect voting for the worse of the two strong candidates. It is theoretically possible that the two "front runner" candidates not to be not centrist and not to represent the people.

Proponents of plurality voting argue that it is very simple and that it forces voters to elect a centrist candidate through compromise voting. To avoid its problems, some elections require a minimum percentage of votes, or a majority, through a "run-off election".

All content from Kiddle encyclopedia articles (including the article images and facts) can be freely used under Attribution-ShareAlike license, unless stated otherwise. Cite this article:
Plurality voting Facts for Kids. Kiddle Encyclopedia.