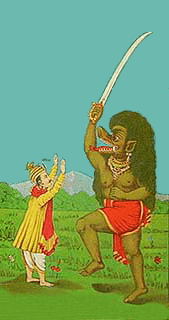 A demon of Kali Yuga with sword...

In Hinduism, Kali Yuga (Devanāgarī: कलियुग, lit. "Age of Kali", "age of vice"), is one of the four stages or yugas that the world goes through. Traditionally, most Hindus believe that the Kali Yuga is 432,000 years long. Kali Yuga is also recognized and stated in Sikhism, in the Guru Granth Sahib.

All content from Kiddle encyclopedia articles (including the article images and facts) can be freely used under Attribution-ShareAlike license, unless stated otherwise. Cite this article:
Kali Yuga Facts for Kids. Kiddle Encyclopedia.