22nd century BC facts for kids 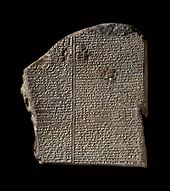 The Deluge tablet of the Gilgamesh epic in Akkadian. The historical Gilgamesh had died centuries earlier before his epic was recorded

All content from Kiddle encyclopedia articles (including the article images and facts) can be freely used under Attribution-ShareAlike license, unless stated otherwise. Cite this article:
22nd century BC Facts for Kids. Kiddle Encyclopedia.