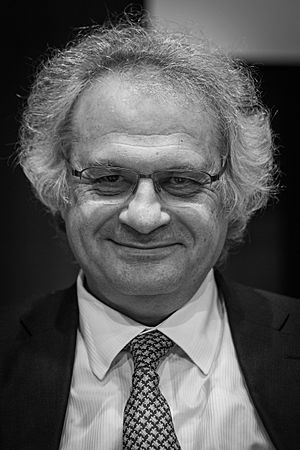 Amin Maalouf is a Lebanese author. He was born on 25 February, 1949 in Beirut, Lebanon. He studied sociology at the French University in Beirut. He was the director of the Beirut daily newspaper an-Nahar. But, he left the country 1975 at the start of the Lebanese Civil War. He moved to Paris and still lives there today.

Maalouf writes in French, and his works have been translated into many languages. He received the Prix Goncourt in 1993 for his book Rock of Tanios.

He uses his experiences of civil war and migration in writing his novels. The characters in his novels are wanderers. They may not have just one home country, language, or religions.

All content from Kiddle encyclopedia articles (including the article images and facts) can be freely used under Attribution-ShareAlike license, unless stated otherwise. Cite this article:
Amin Maalouf Facts for Kids. Kiddle Encyclopedia.