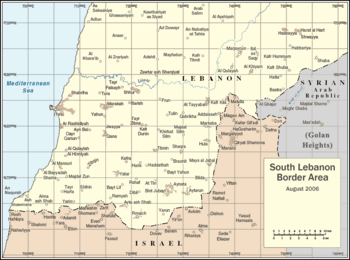 Southern Lebanon is an area of Lebanon. It includes the South Governorate and the Nabatiye Governorate. These two governorates were separated from the same province in the early 1990s. The Rashaya and Western Beqaa Districts, the southernmost districts of the Beqaa Governorate, in Southern Lebanon are sometimes included in this area. The main cities of the region are Sidon, Tyre, Jezzine and Nabatiyeh.

All content from Kiddle encyclopedia articles (including the article images and facts) can be freely used under Attribution-ShareAlike license, unless stated otherwise. Cite this article:
Southern Lebanon Facts for Kids. Kiddle Encyclopedia.