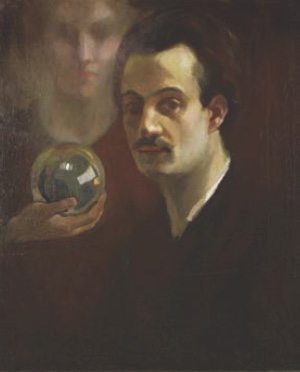 Gibran was born in Lebanon when it was part of the Ottoman Empire. His family moved to the United States of America when he was 12 years old and settled in the Boston neighbourhood of South End, at the time the second-largest Syrian and Lebanese ethnic enclave in the USA, and he went to school both in the US and in Lebanon.

He wrote books in both English and Arabic. His most famous book is The Prophet.

He died at the age of 48 in New York City from tuberculosis and cirrhosis of the liver, due to prolonged serious alcoholism.

All content from Kiddle encyclopedia articles (including the article images and facts) can be freely used under Attribution-ShareAlike license, unless stated otherwise. Cite this article:
Kahlil Gibran Facts for Kids. Kiddle Encyclopedia.