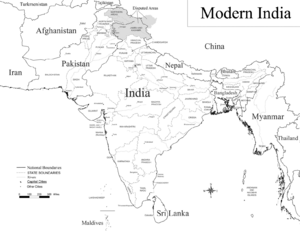 A map of India, Pakistan and Bangladesh.

The Bangladesh Liberation War (Bengali: মুক্তিযুদ্ধ Muktijuddho) was a revolutionary independence war in 1971 which established the republic of Bangladesh. The war pitted East Pakistan (later joined by India) against West Pakistan, and lasted over a duration of nine months. It witnessed large-scale atrocities, the exodus of 10 million refugees and the displacement of 30 million people.

Ghulam Azam and Motiur Rahman Nizami were convicted for war crimes as a result of the liberation war. Azam died before a final hearing while Nizami was executed for his crimes in May 2016.

All content from Kiddle encyclopedia articles (including the article images and facts) can be freely used under Attribution-ShareAlike license, unless stated otherwise. Cite this article:
Bangladesh Liberation War Facts for Kids. Kiddle Encyclopedia.