The Kyshtym disaster was a radioactive contamination accident that occurred on 29 September 1957 at Mayak, a plutonium production site in Russia for nuclear weapons and nuclear fuel reprocessing plant of the Soviet Union.

The event occurred in Ozyorsk, Chelyabinsk Oblast, a closed city built around the Mayak plant. It measured as a Level 6 disaster on the International Nuclear Event Scale (INES), making it the third-most serious nuclear accident ever recorded, behind the Fukushima Daiichi nuclear disaster and the Chernobyl disaster (both Level 7 on the INES).

At least 22 villages were exposed to radiation from the disaster, with a total population of around 10,000 people evacuated. Some were evacuated after a week, but it took almost 2 years for evacuations to occur at other sites.

The disaster spread hot particles over more than 52,000 square kilometres (20,000 sq mi), where at least 270,000 people lived. Since Ozyorsk/Mayak (named Chelyabinsk-40, then Chelyabinsk-65, until 1994) was not marked on maps, the disaster was named after Kyshtym, the nearest known town. 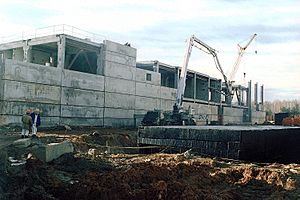 After World War II, the Soviet Union lagged behind the U.S. in development of nuclear weapons, so it started a rapid research and development program to produce a sufficient amount of weapons-grade uranium and plutonium.

The Mayak plant was built in haste between 1945 and 1948. Gaps in physicists' knowledge about nuclear physics at the time made it difficult to judge the safety of many decisions. Environmental concerns were not taken seriously during the early development stage.

Initially Mayak was dumping high-level radioactive waste into a nearby river, which flowed to the river Ob, flowing farther down to the Arctic Ocean. All six reactors were on Lake Kyzyltash and used an open-cycle cooling system, discharging contaminated water directly back into the lake. 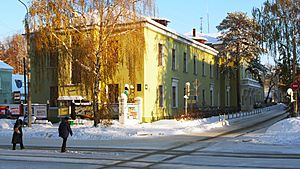 The building where the Mayak chemical plant management was located

When Lake Kyzyltash quickly became contaminated, Lake Karachay was used for open-air storage, keeping the contamination a slight distance from the reactors but soon making Lake Karachay the most-polluted spot on Earth.

A storage facility for liquid nuclear waste was added around 1953. It consisted of steel tanks mounted in a concrete base, 8.2 meters (27 ft) underground. Because of the high level of radioactivity, the waste was heating itself through decay heat (though a chain reaction was not possible). For that reason, a cooler was built around each bank, containing 20 tanks.

Facilities for monitoring operation of the coolers and the content of the tanks were inadequate. 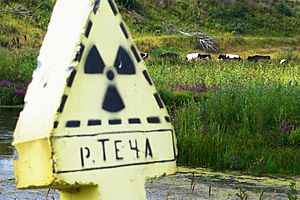 In 1957 the cooling system in one of the tanks containing about 70–80 tons of liquid radioactive waste failed and was not repaired. The temperature in it started to rise, resulting in evaporation and a chemical explosion of the dried waste, consisting mainly of ammonium nitrate and acetates. 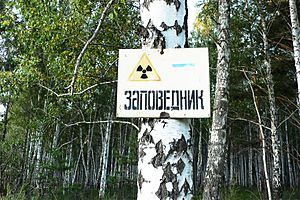 The explosion, on 29 September 1957, estimated to have a force of about 70–100 tons of TNT, threw the 160-ton concrete lid into the air. There were no immediate casualties as a result of the explosion, but it released a huge amount of radioactivity.

Most of this contamination settled out near the site of the accident and contributed to the pollution of the Techa River, but a plume of radiation spread out over hundreds of kilometers.

Previously contaminated areas within the affected area include the Techa river, which had previously received radiation because of deliberately dumped waste, and Lake Karachay. 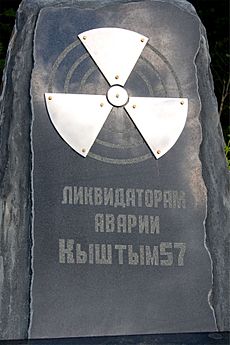 This area is usually referred to as the East-Ural Radioactive Trace (EURT).

All content from Kiddle encyclopedia articles (including the article images and facts) can be freely used under Attribution-ShareAlike license, unless stated otherwise. Cite this article:
Kyshtym disaster Facts for Kids. Kiddle Encyclopedia.