The International Nuclear Event Scale (INES) is a system introduced by the International Atomic Energy Agency (IAEA). It was introduced to allow people to communicate how serious a nuclear accident is. Other people are then able to react faster to take protection measures. For each level, there is a list of criteria (things) that must be there, for the accident to be of that level.

There are 7 levels on the INES scale: 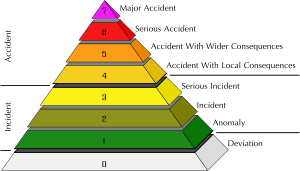 Level 7 is the highest level. Accidents of this type have a large impact (pollution, radiation) outside the site where they occur. The health of many people is put in danger. There are big effects on the environment. Examples: Fukushima nuclear disaster - 2011, Chernobyl disaster (former Soviet Union) - 1986.

Level 6 Accidents of this type have a large impact (pollution, radiation) outside the site where they occur. Several governments may need to take the full set of countermeasures to protect their population. Example: Mayak (former Soviet Union)- 1957.

Level 5 Accidents of this type do release some radiation. Some groups of people which are at risk may need special countermeasures. Examples: Windscale fire (United Kingdom) - 1957, Three Mile Island accident (United States) - 1979.

The Levels 5-7 are related to severe damage of the reactor core and the radiological barriers.

Level 4 is related to significant damage of the reactor core / radiological barriers and/or a fatal exposure of a worker (or more), but the off-site impact is minor, resulting in public exposure of the order of the prescribed limits. Examples: Windscale (United Kingdom) - 1973, Saint-Laurent (France) - 1980, Buenos Aires (Argentina) - 1983.

Level 3 is characterized by very small off-site impact, although related to severe spread of contamination on-site / acute health effects to a worker (or more). It is a "near accident" event, when no safety layers are remaining. Example: Vandellos (Spain) - 1989, THORP plant Sellafield (United Kingdom) - 2005.

Level 2 is an incident with no off-site impact, related to significant spread of contamination on-site / overexposure of a worker.

Level 1 is an anomaly beyond the authorized operating regime.

Level 0 is a "below-scale event" of no safety significance.

There are also events of no safety relevance, characterized as "out of scale".

All content from Kiddle encyclopedia articles (including the article images and facts) can be freely used under Attribution-ShareAlike license, unless stated otherwise. Cite this article:
International Nuclear Event Scale Facts for Kids. Kiddle Encyclopedia.