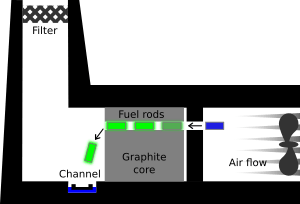 The Windscale fire was a devastating fire in Britain's first nuclear reactor at Windscale (now Sellafield) in 1957. The fire spread radioactive fallout over hundreds of miles. Some of the most dangerous contamination was kept secret, and its effects only came to light years later. At the back of the reactor, ruptured fuel cartridges containing uranium are still jammed in the fire damaged core, awaiting safe removal. Official estimates are that up to a hundred people may have died from the contamination. The cleanup cost over a hundred million pounds. The Windscale fire was the first fire in any nuclear facility.

All content from Kiddle encyclopedia articles (including the article images and facts) can be freely used under Attribution-ShareAlike license, unless stated otherwise. Cite this article:
Windscale fire Facts for Kids. Kiddle Encyclopedia.