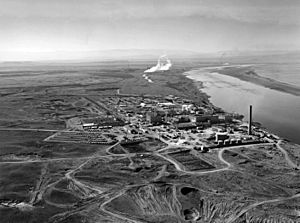 The Hanford site represents two-thirds of the United States' high-level radioactive waste by volume. Nuclear reactors line the riverbank at the Hanford Site along the Columbia River in January 1960.

As of 2013, the Fukushima nuclear disaster site remains highly radioactive. About 160,000 people still live in temporary housing. Some land will be unfarmable for centuries. The difficult cleanup job will take 40 or more years, and cost tens of billions of dollars. 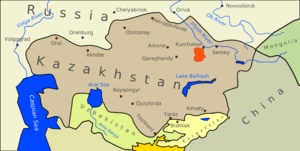 The 18,000 km2 expanse of the Semipalatinsk Test Site (indicated in red), which covers an area the size of Wales. The Soviet Union conducted 456 nuclear tests at Semipalatinsk from 1949 until 1989 with little regard for their effect on the local people or environment. The full impact of radiation exposure was hidden for many years by Soviet authorities and has only come to light since the test site closed in 1991. 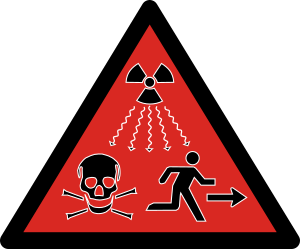 All content from Kiddle encyclopedia articles (including the article images and facts) can be freely used under Attribution-ShareAlike license, unless stated otherwise. Cite this article:
Radioactive contamination Facts for Kids. Kiddle Encyclopedia.