Demographics of Russia facts for kids

The Demographics of Russia is the study of the population and people in Russia.

The population of Russia in 2018 is estimated to be around 144,526,636 people. This number does not include the people in Crimea. This makes Russia the 9th most populous country in the world.

Ethnic Russians make up about 81% of Russia's population. 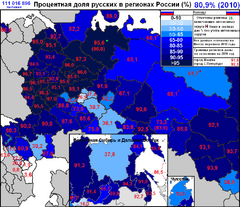 The total fertility rate (TFR), which measures how many children the average woman in a region will have, in Russia is 1.62 children born/woman as of 2017. This is one of the highest rates in Eastern Europe.

Below is a list of the total fertility rates by each federal subject. The lowest TFR is in Leningrad Oblast, and the highest is in the Republic of Tuva.

Temple of All Religions in Kazan. The temple is not active, but is a symbol of the religious diversity in Kazan.

There has been a rise in Russian converts to Catholicism in recent years. Catholics make up less than 1% of the population, and number at 140,000 citizens. Most live in Western Russia. 47% of Catholics in Russia are ethnic Russians, 16% are Germans, 9% are Armenians, 4% are Belarusians, and the rest are Koreans, Poles, Lithuanians, and others.

Lutherans in Russia have typically been ethnic Finns or Germans. In recent years, some Russians have been converting to Lutheranism, so some traditionally Finnish churches now have more Russian members than Finnish.

Christians not associated with any church or denomination make up 4% of the population.

Islam is the second largest religion in Russia. It is popular in the Caucasus region and some republics in central Russia. In 2012, Muslims made up almost 7% of the population. However, this number does not include the Muslim-majority republics of Chechnya and Ingushetia. Between 1998 and 2007, the number of Muslims in Russia doubled from 5.9 million to 11.4 million. Most Muslims in Russia are Sunni. A little over 10% of the Muslim population is Shia. Sunni Sufism is a tradition in some areas, notably Chechnya and Dagestan.

5 federal subjects have a Muslim-majority population. These are Chechnya, Ingushetia, Dagestan, Kabardino-Balkaria, and Tatarstan.

All content from Kiddle encyclopedia articles (including the article images and facts) can be freely used under Attribution-ShareAlike license, unless stated otherwise. Cite this article:
Demographics of Russia Facts for Kids. Kiddle Encyclopedia.