Flag of the Murmansk Oblast. 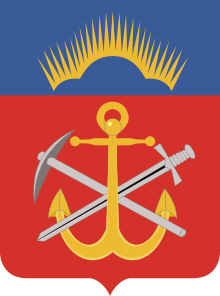 Coat of arms of the Murmansk Oblast.

Location of the oblast.

Murmansk Oblast (Russian: Му́рманская о́бласть, Murmanskaya oblast' ) is a federal subject in northwestern Russia. The administrative centre is Murmansk, where most of the population lives. The oblast has a population of 741,511.

Records show people first began to populate the area sometime between 8000 BC and 7000 BC. The first permanent towns began to appear in the 15th century. These towns were mainly on the Tersky Coast. In the late 15th century, the area became part of the Grand Duchy of Moscow. At the time, most of the economy was based on fishing.

The oblast is divided into six districts, six closed cities and six cities and towns under the oblast's control.

These cities are controlled by the federal government. A "closed city" is a term for a city where residents need special permission to live there.

Cities and towns under the oblast's control

These cities have their own oblast territory.

Most of the oblast is in the arctic circle, meaning in summer the sun is in the sky all day, while at night the sun never rises. The entire oblast also has a subarctic climate, with very cold winters, and short, warm summers. The area isn't as cold as other locations of the same longitude because of the effects of the North Atlantic Current. The current's influence also means that the northern coast is generally "warmer" than the southern central region.

The native people of the area are the Sami, but they only make up 0.2% of the population today.

Below is a list of the largest cities in the oblast:

All content from Kiddle encyclopedia articles (including the article images and facts) can be freely used under Attribution-ShareAlike license, unless stated otherwise. Cite this article:
Murmansk Oblast Facts for Kids. Kiddle Encyclopedia.