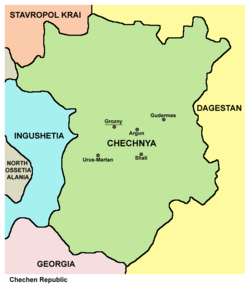 Chechnya (called Noxçiyçö in the Chechen language) is officially a part of Russia, in the Caucasus region. It has tried to leave Russia several times. The issue is still being disputed, mainly because many people, both Russian and Chechen (people from Chechnya), died during fighting between them. Most people of Chechnya are Muslims and are of ancient Hurrian roots who spoke a Caucasian language. Most Chechens belong to Shafi`i school of Sunni Islam.

Chechens speak their own language, not related to the Russian language. Chechen is part of the Northeast Caucasian, or Vainakh, family, while Russian is a Slavic language.

Russia has claimed Chechnya as part of its country since the Russians invaded the Caucasus in the 18th century.

All content from Kiddle encyclopedia articles (including the article images and facts) can be freely used under Attribution-ShareAlike license, unless stated otherwise. Cite this article:
Chechnya Facts for Kids. Kiddle Encyclopedia.