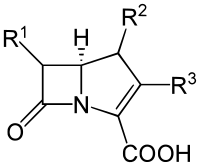 Structure of the carbapenem backbone

Carbapenems are a class of antibiotics which act against a wide range of bacteria. Their structure is difficult for bacterial enzymes to break down. They were originally developed from a product of Streptomyces cattleya.

Carbapenems are one of the "antibiotics of last resort" for many bacterial infections, such as Escherichia coli (E. coli) and Klebsiella pneumoniae.

Recently, alarm has been raised about an "Indian superbug". This is a strain resistant to Carapenems, which was discovered in Delhi. This strain produces an enzyme which chops up the antibiotic molecule.

At present there are no new antibiotics in development to replace carbapenems. The worldwide spread of the gene which codes for that enzyme is a potential nightmare scenario.

All content from Kiddle encyclopedia articles (including the article images and facts) can be freely used under Attribution-ShareAlike license, unless stated otherwise. Cite this article:
Carbapenem Facts for Kids. Kiddle Encyclopedia.