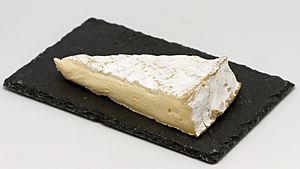 Brie is a type of soft cheese with a yellowish interior and a white layer on the outside of the cheese. Like other cheeses, Brie is a dairy product made from milk. In some countries, Brie cheese is served with fruit as a dessert at the end of a meal.

How it is produced

Originally, Brie was a French cheese, but now there are also Brie-style cheeses from outside of France. The cheese is produced in the region of the same name (which is basically just outside of Paris). It is made of the milk of cows.

The milk of soft cheeses (à pate molle in French) is not heated during the production of the cheese. Talleyrand said about this kind of cheese that it was the king of cheeses. He said that in the 19th century. This kind of cheese has been made for at least 1000 years, though.

In Europe this cheese is usually not treated chemically, so it might change in consistency or color. It will go bad if it is not kept in the refrigerator. In most countries, Brie-style cheeses are made with Pasteurized milk.

The following kinds of Brie exist:

Other French Bries are:

Bries from outside France:

Cheeses are made into round loaves, of about 36 cm in diameter. The cheeses then weight about 2.5 kilograms. It is best tasted from April to October, after a ripening period of 8 to 10 weeks. About 2% of the production occurs on farms.

The Brie de Melun is smaller than the Brie de Meaux, but more salt is added to it. The ripening period is 10 weeks. It is best consumed April to September, but it can be found March to November, in some locations. About 5% of production occurs on farms.

When people buy Brie, they should make sure that it has the following traits:

All content from Kiddle encyclopedia articles (including the article images and facts) can be freely used under Attribution-ShareAlike license, unless stated otherwise. Cite this article:
Brie Facts for Kids. Kiddle Encyclopedia.