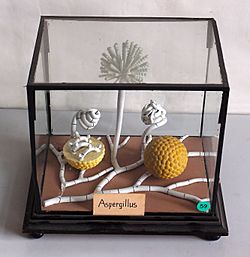 A model of Aspergillus

Aspergillus is a large genus of fungi in the phylum Ascomycota. There are several hundred species or types, some of which are important to medicine, science and industry. It grows as a mould, often on plants. The fungi make asexual spores in a structure called an aspergillum. About one third of types also have sexual reproduction.

Aspergillus species are highly aerobic and are found in almost all oxygen-rich environments. They are common contaminants of starchy foods (such as bread and potatoes), and grow in or on many plants and trees.

Species of Aspergillus are important medically and commercially. Some species can cause infection in humans and other animals. More than 60 Aspergillus species are medically relevant pathogens. For humans there is a range of diseases such as infection to the external ear, skin lesions, and ulcers classed as mycetomas.

All content from Kiddle encyclopedia articles (including the article images and facts) can be freely used under Attribution-ShareAlike license, unless stated otherwise. Cite this article:
Aspergillus Facts for Kids. Kiddle Encyclopedia.