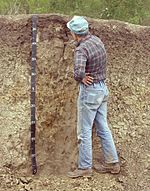 Soil science deals with soil as a natural resource on the surface of the earth.

But many more sciences deal with knowledge of soils and the advancement of the soil sciences: engineering, agronomists, chemistry, geology, geography, biology, microbiology, sylviculture, public health, archaeology, and regional planning.

"Soil" refers to anything between the top of the dirt and the top of the underlying rock (called "bedrock"). Soil is often broken into layers. The top layer is high in organic matter (roting plants and such). Then there is a layer of layer of soil where rain water has removed some metals (called "leaching"). Those metals get collected in another, lower layer. Finally, there is a layer made up mostly of broken bits of bedrock. A soil can have all of these layers, or only a few.

Soils are important because most groundwater, which is used in everything from city water supplies to farming, is found in soil, not bedrock.

Fields of application in soil science 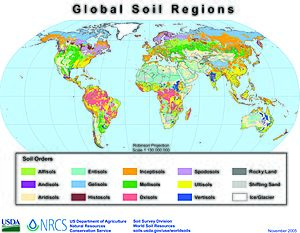 Map of global soil regions from the USDA

All content from Kiddle encyclopedia articles (including the article images and facts) can be freely used under Attribution-ShareAlike license, unless stated otherwise. Cite this article:
Soil science Facts for Kids. Kiddle Encyclopedia.