The Descent of Man facts for kids 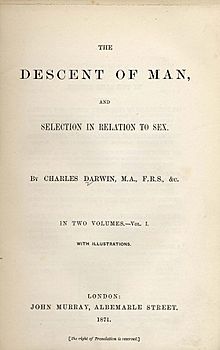 Title page of the first edition

The Descent of Man, and selection in relation to sex is a book by Charles Darwin, first published in 1871.

It was Darwin's second great book on evolutionary theory, the first being his 1859 work, On the Origin of Species.

Darwin had said almost nothing about human beings in the Origin, except a single sentence:
"Light will be thrown on the origin of man and his history".

In The Descent of Man, Darwin applies evolutionary theory to human evolution, and also explains his theory of sexual selection. He thought the two topics were closely connected.

In the nearly 12 years between the Origin and the Descent of Man, several writers had written works on the subject. Noteworthy were:

All content from Kiddle encyclopedia articles (including the article images and facts) can be freely used under Attribution-ShareAlike license, unless stated otherwise. Cite this article:
The Descent of Man Facts for Kids. Kiddle Encyclopedia.