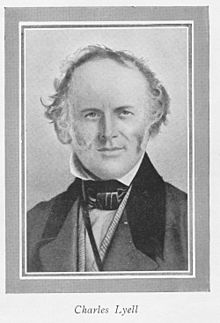 Sir Charles Lyell, 1st Baronet, (14 November 1797 – 22 February 1875) was a British geologist. He was the foremost geologist of his day, and an influence on the young Charles Darwin. His work was rewarded with a knighthood, and later he was created a hereditary baronet.

The house of his birth is in the Scottish Lowlands. it is in the valley of the Highland Boundary Fault, one of the great features of Scottish geology. Round the house is farmland, but within a short distance to the north-west are the Grampian Mountains in the Scottish Highlands.

Charles would have seen this view from his house as a child. He was also fortunate that his family's second home was in a completely different area: at Bartley Lodge in the New Forest, England. Both these places lit his interest in the natural world.

Lyell was a rich man, and earned more money as an author. He came from a prosperous family, and worked briefly as a lawyer in the 1820s. He held was a Professor of Geology at King's College London in the 1830s. From 1830 onward his books gave him both income and fame.

Lyell's Principles of Geology was his most famous and most important book. It was first published in three volumes, in 1830–33. The book was about the ideas of James Hutton, but with many additions, improvements and examples. The book made Lyell to be known as an important geological theorist. It was a work of synthesis, backed by his own personal observations on his travels.

The central argument in Principles was that the present is the key to the past. This was called by William Whewell 'uniformitarianism'. Geological remains from the distant past are explained by processes we can see operating now. Lyell's interpretation of geologic change as the steady accumulation of minute changes over enormously long spans of time was a big influence on his young friend, Charles Darwin.

All content from Kiddle encyclopedia articles (including the article images and facts) can be freely used under Attribution-ShareAlike license, unless stated otherwise. Cite this article:
Charles Lyell Facts for Kids. Kiddle Encyclopedia.