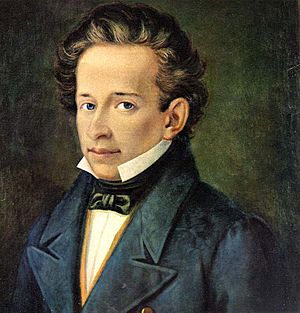 Giacomo Leopardi (Recanati June 29, 1798 – Naples June 14, 1837) was an Italian poet, essayist, philosopher, and philologist. He is considered one of the greatest poets of the 19th century. Even if he lived in a secluded town in the ultra-conservative Papal States, he came in touch with the main thoughts of the Enlightenment, and, by his own literary evolution, created a remarkable and renowned poetic work, related to the Romantic era.

All content from Kiddle encyclopedia articles (including the article images and facts) can be freely used under Attribution-ShareAlike license, unless stated otherwise. Cite this article:
Giacomo Leopardi Facts for Kids. Kiddle Encyclopedia.