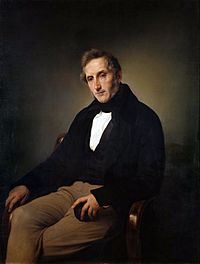 Alessandro Manzoni (Milan 7 March 1785 – Milan 22 May 1873) was an Italian writer and poet. His most famous book is The Betrothed, a novel that is a symbol of the Risorgimento, both for its patriotic message and because it was a fundamental milestone in the development of the modern Italian language.

All content from Kiddle encyclopedia articles (including the article images and facts) can be freely used under Attribution-ShareAlike license, unless stated otherwise. Cite this article:
Alessandro Manzoni Facts for Kids. Kiddle Encyclopedia.