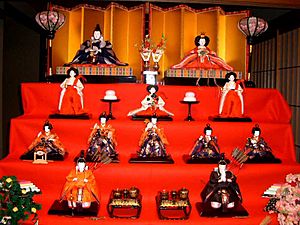 Hinamatsuri (雛祭りcode: ja is deprecated , Hina-matsuri), also called Doll's Day or Girls' Day, is a special day in Japan. Hinamatsuri is celebrated each year on March 3. This is a day for thinking about the happiness and health of young girls in Japanese families.

Since the 8th century, it was traditional to have special days for children twice a year—March 3 for girls and May 5 for boys. 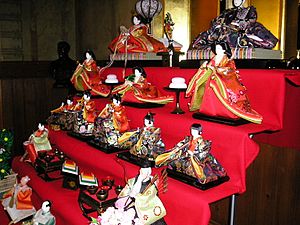 The focus of attention on Hinamatsuri is a display of dolls which are dressed in the fashion of the Heian period. The group of dolls represent the Imperial court (hina ningyō).

The Japanese term for the display steps is hina dan (雛壇code: ja is deprecated ). There may be five or seven steps.

The Kantō region and Kansai region have different placement orders of the dolls from left to right, but the order of dolls per level are the same.

The male doll is traditionally on the right, but sometimes the doll is on the left.

The second tier holds three court ladies san-nin kanjo (三人官女code: ja is deprecated ). Each holds something to do with sake.

Two Imperial ministers (daijin) may be displayed on the fourth tier

All content from Kiddle encyclopedia articles (including the article images and facts) can be freely used under Attribution-ShareAlike license, unless stated otherwise. Cite this article:
Hinamatsuri Facts for Kids. Kiddle Encyclopedia.