Kids Encyclopedia Facts
Not to be confused with Googolplex. 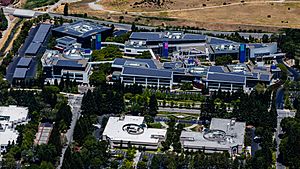 The place was owned by Silicon Graphics in the past. The office space and corporate campus is in a bigger 26-acre (110,000 m2) site. The place also includes Charleston Park and better connection to Permanente Creek, as well as roads that connect to Shoreline Park and the Bay Trail. The project was started in 1994. It was built on the site of one of the working farms in the area.The city owned it at the time.

Google got the facilities in early 2003. Clive Wilkinson Architects redesigned the inside in 2005. Google bought some of Silicon Graphics' properties in June 2006 for $319 million.

The buildings are not tall, but the complex covers a large area of land. The inside of the headquarters has items like shade lamps and giant rubber balls for decoration. The lobby has a piano and a projection of current live Google searches. There are also facilities like free laundry rooms, two small swimming pools, volleyball courts, and eighteen cafeterias with different menus. Google has also put in models of SpaceShipOne and a dinosaur skeleton.

Since 2007 the place has a set of solar panels covering the roofs of eight buildings and two solar carports. These can produce 1.6 megawatts of electricity. 30% of the peak electricity demand comes from the panels in their solar-powered buildings.

In 2013 construction started on a new 1.1 million square foot headquarters campus called "Bay View". This was next to the original campus on 42 acres leased from NASA. The estimated cost of the project is $120 million with a target opening date of 2015.

NBBJ is the architect of the addition. This is also the first time Google has designed its own buildings.

The addition is close to northeast corner of the complex. Google tried to get permission from the city to build bridges over Stevens Creek before announcing its construction. Google's 2012 year-end annual report says that it can expand only 7 acres of the 42-acre site.

All content from Kiddle encyclopedia articles (including the article images and facts) can be freely used under Attribution-ShareAlike license, unless stated otherwise. Cite this article:
Googleplex Facts for Kids. Kiddle Encyclopedia.