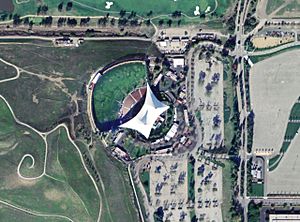 Aerial photograph of Shoreline Amphitheatre, with the parking lots and the neighboring golf course.

Shoreline Amphitheatre is an outdoor amphitheater located in Mountain View, California, in the San Francisco Bay Area. The venue has a capacity of 22,500, with 6,500 reserved seats and 16,000 general admission on the lawn. When the parking lot is utilized for festival stages, the total capacity of the venue can reach 30,000.

The amphitheatre was built in 1985–1986 by the city of Mountain View, in cooperation with local promoter Bill Graham, as part of the Shoreline Park project. Graham designed the amphitheatre to resemble The Grateful Dead's "steal your face" logo.

The premiere season was during the summer of 1986, it was planned to open with a concert by The Grateful Dead, who had to cancel as a result of Jerry Garcia's coma. The first performance at the amphitheater was comedienne Rosanne Barr, opening for Julio Iglesias on June 29, 1986.

Built on a landfill

In its opening year, a fan attending a Steve Winwood concert flicked a cigarette lighter and ignited methane that had been leaking from a landfill beneath the theatre. Several small fires were reported that season. After those incidents, the city of Mountain View commissioned methane testing studies to define the location of methane vapors emanating from the soil within the amphitheater. These tests were used in developing a design for improved methane monitoring and more efficient methane extraction to ensure the amphitheater became safe as an outdoor venue. Ultimately, the lawn was removed, a gas barrier and methane removal equipment were installed, and then the lawn was re-installed.

All content from Kiddle encyclopedia articles (including the article images and facts) can be freely used under Attribution-ShareAlike license, unless stated otherwise. Cite this article:
Shoreline Amphitheatre Facts for Kids. Kiddle Encyclopedia.