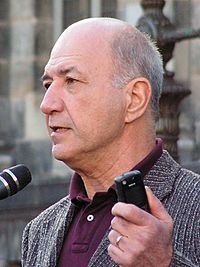 Dr. Wubbo Johannes Ockels (28 March 1946 – 18 May 2014) was a Dutch physicist, mathematician and astronaut. He worked for the European Space Agency (ESA). In 1985, he was in a flight on a Space Shuttle (STS-61-A). This made him the first Dutch citizen in space. Ockels was born in Almelo, Netherlands.

Ockels died from complications of kidney cancer on 18 May 2014 in Amsterdam, Netherlands, aged 68.

All content from Kiddle encyclopedia articles (including the article images and facts) can be freely used under Attribution-ShareAlike license, unless stated otherwise. Cite this article:
Wubbo Ockels Facts for Kids. Kiddle Encyclopedia.