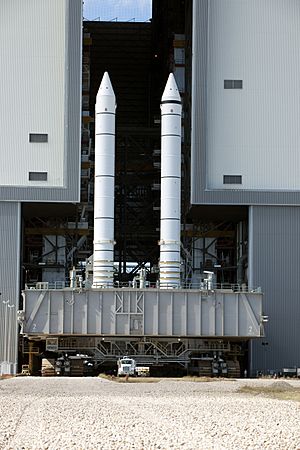 The Space Shuttle Solid Rocket Boosters (SRBs) are the first-stagerockets made for Space Shuttle. The Space Launch System will also use them. They are the most powerful rocket motors ever flown. Each rocket generates 13,800 kilonewtons of thrust during the first two minutes of flight. Before the rocket reached orbit, the SRBs were released and fell into the Atlantic Ocean where they were towed back to shore for reuse.

All content from Kiddle encyclopedia articles (including the article images and facts) can be freely used under Attribution-ShareAlike license, unless stated otherwise. Cite this article:
Space Shuttle Solid Rocket Boosters Facts for Kids. Kiddle Encyclopedia.