Kids Encyclopedia Facts
"Eau Gallie" redirects here. It is not to be confused with Eau Galle. 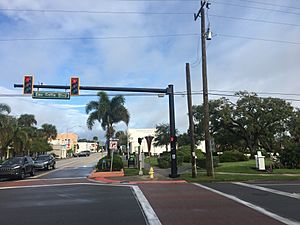 Eau Gallie is a section of the city of Melbourne, Florida, located on the city's northern side. It was an independent city in Brevard County from 1860 until 1969.

That year residents of Eau Gallie and Melbourne voted to merge their governments. A subsequent vote resulted in the combined jurisdiction being named Melbourne. The name and identity of Eau Gallie persists in a number of local entities and was used by the Eau Gallie Arts District Main Street, a fully accredited Florida Main Street program since 2010.

A post office called Eau Gallie was established in 1871, and remained in operation until it was discontinued in 1970. The Kentucky Military Institute wintered in Eau Gallie from 1907 to 1921.

Eau Gallie is commonly said to mean "rocky water", since coquina rocks were found in the area. While eau means "water" in French, gallie is not a French word and may be derived from galet ("pebble" in French). Some attribute it a Chippewa word; however, Chippewa speakers lived much farther north of Florida.

An area of 14.31 acres (5.79 ha), containing 31 houses, is petitioning for official recognition as a Historic District. The first permanent settler, John Carroll Houston, arrived in 1859.

Eau Gallie has original historic buildings, live oaks, and native plants located on the Indian River Lagoon. It is anchored by the Eau Gallie Civic Center, Public Library and Pier, as well as Pineapple Park which has a lighted gazebo under ancient live oaks along the Indian River Lagoon, Foosaner Art Museum/FIT, and the Renee Foosaner Education Center. Eau Gallie is home to the Eau Gallie Arts District Main Street program (EGAD), an award-winning, fully accredited Florida and National Main Street organization. This area is also home to fine art galleries and long-established businesses, as well as new entrepreneurs that have opened new businesses in the historic little city stimulated by the presence of the Eau Gallie Arts District, which boasts an Outdoor Art Museum consisting of over 30 murals, a mosaic and sculptures. The Historic Rossetter House Museum and Gardens, which is on the National Register of Historic Places, offers home tours, rental space for private events and hosts their own events.

All content from Kiddle encyclopedia articles (including the article images and facts) can be freely used under Attribution-ShareAlike license, unless stated otherwise. Cite this article:
Eau Gallie, Florida Facts for Kids. Kiddle Encyclopedia.