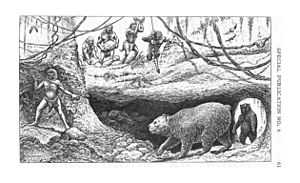 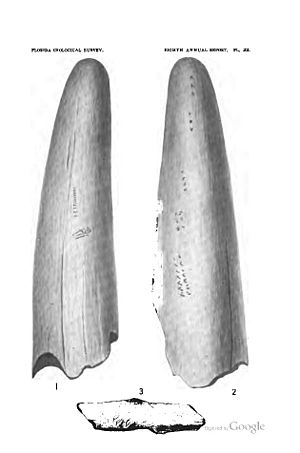 Mammoth or mastodon tusk with marks presumed to have been made by humans, found by E. H. Sellards at Vero man site in 1916

Starting in late 1913 vertebrate fossils were uncovered during the construction of a drainage canal from the Indian River between Vero and Gifford. Samples of the fossils were sent by Isaac M. Weills and Frank Ayers to the state geologist of Florida, E. H. Sellards, who recognized the finds as Pleistocene animals. In 1915, 26 fossilized human bones and fragments were found in the banks of the canal. The following year Sellards conducted his own excavations at the site, recovering an engraved mammoth tusk and a bird bone with marks possibly made by humans. In a nearby location he recovered human bones from the stratum that contained Pleistocene fossils. Sellards also found chert flakes and bone tools, including what appears to be a broken stemmed Archaic projectile point, and near the surface found a few ceramic sherds.

Sellards first published his findings in 1916. He invited other scientists to visit the Vero site and investigate it themselves in October 1916 and in March 1917. Aleš Hrdlička, T. Wayland Vaughan, Oliver Perry Hay, George Grant MacCurdy and Rollin T. Chamberlin visited and examined the site. Sellards and Hays concluded that the human bones dated from the Pleistocene. Hrdlička, MacCurdy and Chamberlin argued that the human bones were much more recent, while Vaughan felt that more evidence was needed before making a decision. Hrdlička, the most prominent physical anthropologist in America at the time, was firmly convinced that humans had not arrived in America until well after the Pleistocene had ended.

Human bones, artifacts and/or human-modified animal bones in a Pleistocene context have been found elsewhere in Florida, including at the nearby Helen Blazes and Melbourne Bone Bed sites.

The human bones excavated by Sellards were passed around various institutions for study. By the time carbon-14 dating of fossils became possible, about 35 years after the discovery of Vero man, some of the bones had been lost, and others had been rendered unusable for such testing due to the way they had been preserved with chemicals.

In 2009 scientists announced the discovery of a carving of a mammoth or mastodon or, although not considered as likely, a giant sloth, on a piece of bone found north of Vero Beach (the general area in which Vero Man was found). The carving may be among the oldest art found in the Americas. Scientists studying the carving noted similarities with Pleistocene art in Europe. Art historian Barbara Olins Alpert has noted that similarity does not prove connection, as finely executed realistic art styles have appeared in various times and places.

In 2014 new excavations at the site of the discovery of Vero man were undertaken by Mercyhurst University and the Old Vero Ice Age Sites Committee, a local non-profit organization. The Old Vero Ice Age Sites Committee announced the discovery of a possible "human living surface" at least 12,000 years old during the 2014 excavation season. Excavations continued in 2015 at the site, with recent finds including 14,000-year-old "charred" bones from a dire wolf and a horse, possibly from a hearth. The archaeologists from Mercyhurst University withdrew from excavations at the Old Vero Man site in Vero Beach after 2015. Starting in 2016, archaeologists from Florida Atlantic University joined the Old Vero Man site excavations.

All content from Kiddle encyclopedia articles (including the article images and facts) can be freely used under Attribution-ShareAlike license, unless stated otherwise. Cite this article:
Vero man Facts for Kids. Kiddle Encyclopedia.