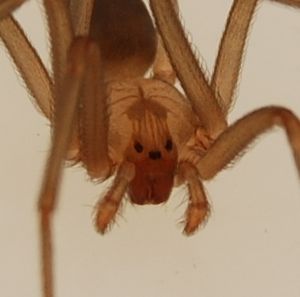 The brown recluse has six eyes (three pairs), unlike most spiders.

The brown recluse spider (Loxosceles reclusa) is a timid but dangerous spider that lives in North America.

The scientific name of the spider Loxosceles reclusa comes from words that mean "slanted leg recluse". The "slanted leg" part comes from the fact that these spiders have their legs touching the ground at an angle instead of straight up and down. The "recluse" part is because this spider is very shy and runs away from humans.

The brown recluse spider can be light brown, dark brown, or even gray. Sometimes it is called the violin spider since its head has a darker mark on it that looks like a violin. Not including its legs, it can grow to about 2 cm (0.79 in) long. They have six eyes, which is an unusual number of eyes for a spider.

Male and female brown recluses can be identified once the spider has molted several times. Spiders have a set of appendages on their faces called pedipalps. The pedipalps on the male have much larger ends than the ones on females. These fattened pedipalps serve as the sex organs for the male. The female has her sex organs on the underside of her body. This is perhaps the only way to easily tell a male from a female. Scientists who study brown recluses and their relatives can even identify relatives of the brown recluse by studying the shapes of the sex organs.

Brown recluse spiders are insectivores. They eat soft-bodied insects (like moths or flies) and other spiders. They are cannibals and will not hesitate to eat each other. When mating, a female brown recluse will try to eat the male.

When preying, the brown recluse slowly creeps toward its prey. Once it is close enough, it pounces on the prey and sinks its fangs into the prey. Its fangs contain a deadly venom that kills the prey very quickly.

Brown recluse spiders are hunting spiders, so they spend most of the time on the ground. They hide during the daytime and sleep, and at night they come out to hunt. They usually do not climb unless they are running from something. They can walk upside-down, but most brown recluses walking on ceilings have probably come from the upstairs floor. The blood cannot flow through their legs while they walk, so they must stop every few seconds to allow the blood to flow.

Brown recluses are very good at survival. They can go without food or water for more than a year. They are also very good at surviving in people's homes during cold winters. If they get their leg caught in something, such as a crack or a predator's mouth, they can drop the leg. The spider can still walk around with only four legs, as long as there is still one leg on each side.

Because these spiders are so good at surviving in hard times, it is very hard to get rid of them. Bug sprays and pest killers usually are not good for killing them, except for some kinds that are against the law to use. A spider that has been sprayed might even become vicious. 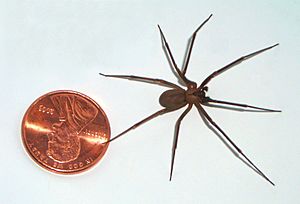 Brown recluses will normally only bite a person if the person is touching the spider or if the spider is stuck between the person and something else. Most brown recluse bites happen when someone puts on clothes that have a brown recluse spider living inside of them. For people who have brown recluses living in their house, it is a good idea to shake out any clothes that have been on the floor for a few days before putting them on. These people should also be careful when walking around in attics, basements, or dark parts of the house with no shoes on. Wearing socks or gloves helps, because the spiders have very short fangs. It is very common for people living with brown recluses to never see the spiders and never be bitten, and good habits can help make sure no one is bitten. 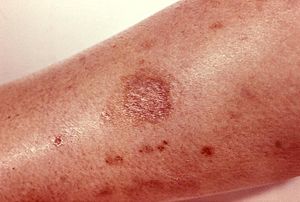 A brown recluse bite that has healed. It has left a scar behind.

Brown recluse spiders have been feared since they were discovered in 1940, and people will often take drastic approaches to rid their homes of these spiders. Spider experts noticed that the bite of a brown recluse could sometimes lead to a terrible infection called necrosis. Sometimes the necrosis becomes fatal, but these fatal bites are actually very rare, and most bites from brown recluses are no more harmful than a normal spider bite. The spider's bite is most dangerous for people who are young or overweight.

It is very common for people bitten by spiders to arrive in a doctor's office without bringing the spider that bit them. When this happens, a doctor must guess what sort of spider could have bitten the person. The brown recluse spider is a very common spider to blame, since its name is so well-known, but it is very seldom that the brown recluse spider was involved. Doctors' guesswork has led many people to believe brown recluses exist outside their native area, such as in California, even though this is not true. It is pretty common for a Brown recluse to bite someone and that person may not feel any symptoms for multiple hours or even days from the time of the bite. In most cases, either a disease was the cause of the symptoms, or a different kind of spider bit the person and the doctor makes a mistake when he or she guesses it was a brown recluse.

Very little is known about the venom of the brown recluse, and spider venom experts have been looking for a long time for ways to effectively tell whether a brown recluse has bitten a patient as well as an antidote for its venom.

All content from Kiddle encyclopedia articles (including the article images and facts) can be freely used under Attribution-ShareAlike license, unless stated otherwise. Cite this article:
Brown recluse spider Facts for Kids. Kiddle Encyclopedia.