A lychee (pronounced LEE-ji) is a tropical fruit in the genus Litchi. It comes from southern China. Since it is tropical, it will only grow in a warm, wet climate.

The inside of a lychee is a clear, pinkish-white colour. The outside of the fruit is a hard spiky shell. Its seed is brown in colour and very hard. The seeds are poisonous and should not be eaten. The lychee has a sweet taste, and may be frozen, made into sauces, jam, puree, or preserves. When frozen, the lychee tastes similar to sorbet. 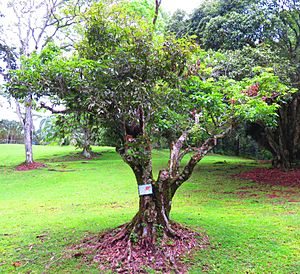 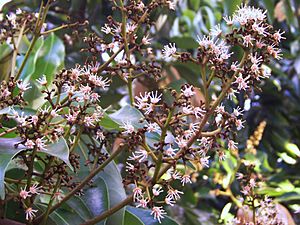 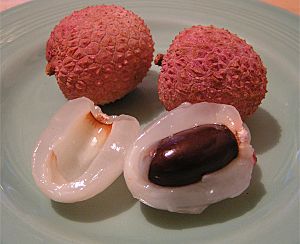 The bark is grey-black, the branches a brownish-red. Leaves are 10 to 25 cm (3.9 to 9.8 in) or longer, with leaflets in 2-4 pairs. Lychee have a similar foliage to the Lauraceae family likely due to convergent evolution. They are adapted by developing leaves that repel water, and are called laurophyll or lauroid leaves. Flowers grow on a terminal inflorescence with many panicles on the current season's growth. The panicles grow in clusters of ten or more, reaching 10 to 40 cm (3.9 to 15.7 in) or longer, holding hundreds of small white, yellow, or green flowers that are distinctively fragrant.

The lychee bears fleshy fruits that mature in 80–112 days depending on climate, location, and cultivar. Fruits vary in shape from round to ovoid to heart-shaped, up to 5 cm long and 4 cm wide (2.0 in × 1.6 in), weighing approximately 20 g. The thin, tough skin is green when immature, ripening to red or pink-red, and is smooth or covered with small sharp protuberances roughly textured. The rind is inedible but easily removed to expose a layer of translucent white fleshy aril with a floral smell and a fragrant, sweet flavor. The skin turns brown and dry when left out after harvesting. The fleshy, edible portion of the fruit is an aril, surrounding one dark brown inedible seed that is 1 to 3.3 cm long and 0.6 to 1.2 cm wide (0.39–1.30 by 0.24–0.47 in). Some cultivars produce a high percentage of fruits with shriveled aborted seeds known as 'chicken tongues'. These fruit typically have a higher price, due to having more edible flesh. Since the perfume-like flavour is lost in the process of canning, the fruit is usually eaten fresh. 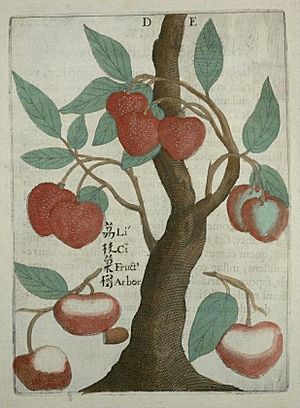 Cultivation of lychee began in the region of southern China, going back to 1059 AD, Malaysia, and northern Vietnam. Unofficial records in China refer to lychee as far back as 2000 BC. Wild trees still grow in parts of southern China and on Hainan Island. There are many stories of the fruit's use as a delicacy in the Chinese Imperial Court. It was first described and introduced to the West in 1656 by Michal Boym, a Polish Jesuit missionary (at that time Polish–Lithuanian Commonwealth).

In the 1st century, fresh lychees were in such demand at the Imperial Court that a special courier service with fast horses would bring the fresh fruit from Guangdong. There was great demand for lychee in the Song Dynasty (960-1279), according to Cai Xiang, in his Li chi pu (Treatise on Lychees). It was also the favourite fruit of Emperor Li Longji (Xuanzong)'s favoured concubine Yang Yuhuan (Yang Guifei). The emperor had the fruit delivered at great expense to the capital.

The Chinese classical work, Shanglin Fu, states that the alternate name, meaning leaving its branches, exists, because once the fruit is picked it deteriorates quickly.

The lychee attracted attention of European travellers, such as Juan González de Mendoza in his History of the great and mighty kingdom of China (1585; English translation 1588), based on the reports of Spanish friars who had visited China in the 1570s gave the fruit high praise:

[T]hey haue a kinde of plummes, that they doo call lechias, that are of an exceeding gallant tast, and neuer hurteth any body, although they shoulde eate a great number of them.

The lychee was scientifically described by Pierre Sonnerat (1748–1814) on a return from his travels to China and Southeast Asia. It was then introduced to the Réunion Island in 1764 by Joseph-François Charpentier de Cossigny de Palma. It was later introduced to Madagascar which has become a major producer. 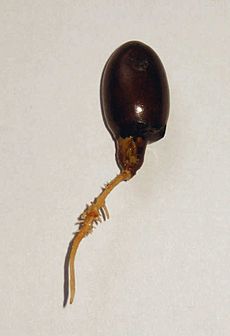 Germinating lychee seed with its main root (about 3 months old)

Lychees are extensively grown in China, India, Thailand, Vietnam and the rest of tropical Southeast Asia, the Indian Subcontinent, and more recently in South Africa, Brazil, the Caribbean, Australia and the United States. They require a tropical climate that is frost-free and is not below the temperature of −4 °C (25 °F). Lychees also require a climate with high summer heat, rainfall, and humidity. Growth is best on well-drained, slightly acidic soils rich in organic matter and mulch. A wide range of cultivars are available, with early and late maturing forms suited to warmer and cooler climates respectively. They are also grown as an ornamental tree as well as for their fruit.

According to folklore, a lychee tree that is not producing much fruit can be girdled, leading to more fruit production. When the centre opening of trees is carried out as part of training and pruning, stereo fruiting can be achieved for higher orchard productivity.

Lychees are commonly sold fresh in Asian markets, and in recent years, also widely in supermarkets worldwide. The red rind turns dark brown when the fruit is refrigerated, but the taste is not affected. It is also sold canned year-round. The fruit can be dried with the rind intact, at which point the flesh shrinks and darkens. Dried lychees are often called lychee nuts, though they are not a real nut. 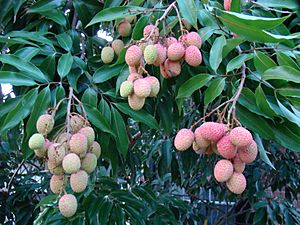 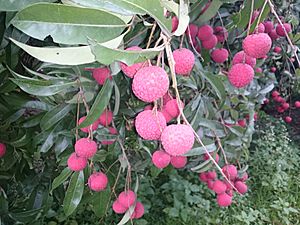 There are numerous lychee cultivars, with considerable confusion regarding their naming and identification. The same cultivar grown in different climates can produce very different fruit. Cultivars can also have different synonyms in various parts of the world. Southeast Asian countries, along with Australia, use the original Chinese names for the main cultivars. India grows more than a dozen different cultivars. South Africa grows mainly the “Mauritius” cultivar. Most cultivars grown in the United States were imported from China, except for the “Groff”, which was developed in the state of Hawaii.

All content from Kiddle encyclopedia articles (including the article images and facts) can be freely used under Attribution-ShareAlike license, unless stated otherwise. Cite this article:
Lychee Facts for Kids. Kiddle Encyclopedia.