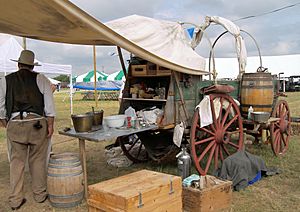 A chuckwagon is a type of field kitchen covered wagon historically used for the storage and transportation of food and cooking equipment on the prairies of the United States and Canada. Such wagons formed part of a wagon train of settlers or fed traveling workers such as cowboys or loggers.

In modern times, chuckwagons feature in certain cooking competitions and events. Chuckwagons are also used in a type of horse racing known as chuckwagon racing.

While some form of mobile kitchens had existed for generations, the invention of the chuckwagon is attributed to Charles Goodnight, a Texas rancher known as the "father of the Texas Panhandle," who introduced the concept in 1866. After the American Civil War, the beef market in Texas expanded. Some cattlemen herded cattle in parts of the country that did not have railroads which would mean they needed to be fed on the road for months at a time. Goodnight modified a Studebaker manufactured covered wagon, a durable Civil War army-surplus wagon, to suit the needs of cowboys driving cattle from Texas to sell in New Mexico. He added a "chuck box" to the back of the wagon with drawers and shelves for storage space and a hinged lid to provide a flat working surface. A water barrel was also attached to the wagon and canvas was hung underneath to carry firewood. A wagon box was used to store cooking supplies and cowboys' personal items.

Chuckwagon food typically included easy-to-preserve items like beans and salted meats, coffee, and sourdough biscuits. Food would also be gathered en route. There was no fresh fruit, vegetables, or eggs available and meat was not fresh unless an animal was injured during the run and therefore had to be killed. The meat they ate was greasy cloth-wrapped bacon, salt pork, and beef, usually dried, salted or smoked. On cattle drives, it was common for the "cookie" who ran the wagon to be second in authority only to the "trailboss." The cookie would often act as cook, barber, dentist, and banker.

The term "chuck wagon" comes from "chuck", a slang term for food, and not from the nickname for "Charles".

Charles Goodnight's chuckwagon was named in 2003 as the "official state vehicle" of Texas; exhibit is at the Texas Cowboy Hall of Fame in the Fort Worth Stockyards in Fort Worth.

The American Chuckwagon Association is an organization dedicated to the preservation of the heritage of the chuckwagon. Its members participate in chuckwagon cook-offs throughout the U.S.

The Academy of Western Artists presents an annual award for outstanding chuckwagon cooking as well as honors in other fields relating to the culture of the American cowboy. 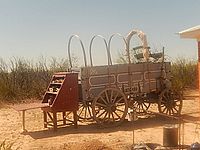 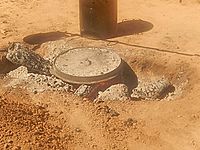 During the summer, tourists can experience chuckwagon suppers across the traditional cattle ranges of the Western United States and Western Canada, either on their own or as part of a trail ride or stay at a dude ranch. These are sometimes followed by live entertainment.

All content from Kiddle encyclopedia articles (including the article images and facts) can be freely used under Attribution-ShareAlike license, unless stated otherwise. Cite this article:
Chuckwagon Facts for Kids. Kiddle Encyclopedia.