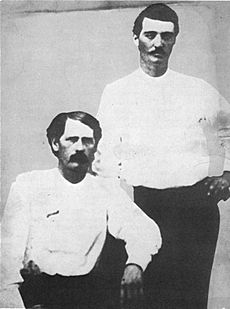 Deputies Bat Masterson (left) and Wyatt Earp in Dodge City, 1876. The scroll on Earp's chest is a cloth pin-on badge

Dodge City is the county seat of Ford County, Kansas, United States. Named after nearby Fort Dodge, the city is famous in American culture for its history as a wild frontier town of the Old West. The 2010 census showed the city population was 27,340.

In the 1880s Dodge City became a boomtown, with thousands of cattle passing annually through its stockyards. The peak years of the cattle trade in Dodge City were from 1883 to 1884. During that time the town grew tremendously. Dodge City had more famous (and infamous) gunfighters working at one time or another than any other town in the West, many of whom participated in the Dodge City War of 1883.

Fort Mann was the first settlement of non-indigenous people in the area that became Dodge City, built by civilians in 1847 to provide protection for travelers on the Santa Fe Trail. Fort Mann collapsed in 1848 after an Indian attack. In 1850, the U.S. Army arrived to provide protection in the region and constructed Fort Atkinson on the old Fort Mann site. The army abandoned Fort Atkinson in 1853. Military forces on the Santa Fe Trail were reestablished farther north and east at Fort Larned in 1859, but the area remained vacant around what would become Dodge City until the end of the Civil War. In April 1865, the Indian Wars in the West began heating up, and the army constructed Fort Dodge to assist Fort Larned in providing protection on the Santa Fe Trail. Fort Dodge remained in operation until 1882.

The town of Dodge City can trace its origins to 1871 when rancher Henry J. Sitler built a sod house west of Fort Dodge to oversee his cattle operations in the region, conveniently located near the Santa Fe Trail and Arkansas River, and Sitler's house quickly became a stopping point for travelers. Others saw the commercial potential of the region with the Santa Fe Railroad rapidly approaching from the east. In 1872, Dodge City was staked out on the 100th Meridian and the legal Western boundary of the Fort Dodge reservation. The town site was platted and George M. Hoover established the first bar in a tent to serve thirsty soldiers from Fort Dodge. The railroad arrived in September to find a town ready and waiting for business. The early settlers in Dodge City traded in buffalo bones and hides and provided a civilian community for Fort Dodge. However, with the arrival of the railroad, Dodge City soon became involved in the cattle trade.

The idea of driving Texas longhorn cattle from Texas to railheads in Kansas originated in the late 1850s but was cut short by the Civil War. In 1866, the first Texas cattle started arriving in Baxter Springs in southeastern Kansas by way of the Shawnee Trail. However, Texas longhorn cattle carried a tick that spread splenic fever, known locally as Texas Fever, among other breeds of cattle. Alarmed Kansas farmers persuaded the Kansas State Legislature to establish a quarantine line in central Kansas. The quarantine prohibited Texas longhorns from the heavily settled, eastern portion of the state.

With the cattle trade forced west, Texas longhorns began moving north along the Chisholm Trail. In 1867, the main cow town was Abilene, Kansas. Profits were high, and other towns quickly joined in the cattle boom: Newton in 1871; Ellsworth in 1872; and Wichita in 1872. However, in 1876 the Kansas State Legislature responded to pressure from farmers settling in central Kansas and once again shifted the quarantine line westward, which essentially eliminated Abilene and the other cow towns from the cattle trade. With no place else to go, Dodge City suddenly became the "queen of the cow towns."

A new route known as the Great Western Cattle Trail or Western Trail branched off from the Chisholm Trail to lead cattle into Dodge City. Dodge City became a boomtown, with thousands of cattle passing annually through its stockyards. The peak years of the cattle trade in Dodge City were from 1883 to 1884, and during that time the town grew tremendously. In 1880, Dodge City got a new competitor for the cattle trade from the border town of Caldwell. For a few years, the competition between the towns was fierce, but there were enough cattle for both towns to prosper.

Nevertheless, it was Dodge City that became famous, and no town could match Dodge City's reputation as a true frontier settlement of the Old West. Dodge City had more famous (and infamous) gunfighters working at one time or another than any other town in the West, many of whom participated in the Dodge City War of 1883. It also boasted the usual array of saloons and gambling halls. For a time in 1884, Dodge City even had a bullfighting ring where Mexican bullfighters would put on a show with specially chosen longhorn bulls.

As more agricultural settlers moved into western Kansas, pressure increased on the Kansas State Legislature to do something about splenic fever. Consequently, in 1885 the quarantine line was extended across the state and the Western Trail was all but shut down. By 1886, the cowboys, saloon keepers, gamblers moved west to greener pastures, and Dodge City became a sleepy little town much like other communities in western Kansas.

Meat packing is the main industry in Dodge City. The city also has farm implement manufacturing, and is a supply center for area agriculture. Livestock-raising is a major activity while wheat and sorghum are the area's main crops.

In addition, a local tourism industry, including a casino resort, has developed to capitalize on Dodge City's history as an Old West cowtown. The service sector accounts for much of the rest of the local economy with local government, schools, retail stores, and health care providers as the city's other major employers.

All content from Kiddle encyclopedia articles (including the article images and facts) can be freely used under Attribution-ShareAlike license, unless stated otherwise. Cite this article:
Dodge City Facts for Kids. Kiddle Encyclopedia.