The Long Branch Saloon was a well-known saloon in Dodge City, Kansas from about 1874 to 1885. It had numerous owners, most notably Chalk Beeson and gunfighter Luke Short. The establishment provided gambling and live entertainment, including Beeson's five-person orchestra. It was the scene of several altercations, shoot-outs, gunfights, and standoffs often associated with cattle towns in the American wild west. Most famous was the 1879 Long Branch Saloon Gunfight, in which Frank Loving killed Levi Richardson.

The saloon was built as the result of a wager between cowboys and soldiers playing ball. Bets were placed and if the cowboys beat the soldiers, the soldiers agreed to provide building materials to construct a saloon.

Chalkley Beeson, a wealthy farmer and rancher, and William Harris bought the saloon in 1878. Harris named it after his hometown of Long Branch, New Jersey. It was a plain storefront bar with little ornamentation, typical for frontier saloons of the time. The saloon prospered until the railroad replaced the cattle drive. The establishment burned down in 1885 and was never rebuilt.

The saloon soon became the most popular and refined saloon in Dodge City. Beeson was a talented musician and led a five-piece orchestra that played nightly. The Long Branch served milk, tea, lemonade, sarsaparilla, and all types of alcohol including champagne and beer. Anheuser-Busch was the original beer served at the Long Branch. Drinks were kept cold in the winter with ice from the river; in the summer ice was shipped by train from the mountains of Colorado. Gambling ranged from five cent chuck-a-luck to thousand dollar poker. 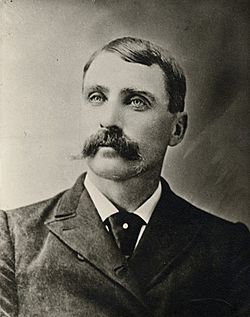 The saloon was the site of a gunfight on April 5, 1879, between Frank Loving and Levi Richardson. Loving accused Richardson of making disrespectful advances towards his wife, and the two got into an argument that turned into a gunfight across a table. Loving was grazed on the hand by one bullet; Richardson was shot three times and died. Town Marshal Bassett arrested Loving, but on April 7, a coroner′s inquest ruled that Loving had acted in self-defense and he was released without charges.

Professional gambler and gunfighter Short's purchase of a partial interest in the saloon in 1883 was credited as one of the causes of the bloodless Dodge City War.

All content from Kiddle encyclopedia articles (including the article images and facts) can be freely used under Attribution-ShareAlike license, unless stated otherwise. Cite this article:
Long Branch Saloon Facts for Kids. Kiddle Encyclopedia.