Medora is a city in Billings County, North Dakota, United States. The only incorporated place in Billings County, it is also the county seat. Much of the surrounding area is part of either Little Missouri National Grassland or Theodore Roosevelt National Park. The population was 112 at the 2010 census. It is part of the Dickinson Micropolitan Statistical Area. 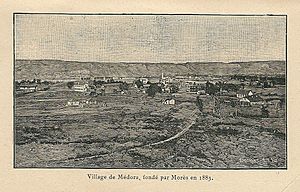 Medora was founded in 1883 along the transcontinental rail line of the Northern Pacific Railway by French nobleman Marquis de Mores, who named the city after his wife Medora von Hoffman. Marquis de Mores wanted to ship refrigerated meat to Chicago via the railroad. He built a meat packing plant for this purpose and a house named the Chateau de Mores, which is now a museum.

In the evening of April 7, 1903, President Theodore Roosevelt visited Medora on a presidential tour of the Western United States. Most of the Badlands' residents turned out to greet him on his whistle stop. Roosevelt later recalled that “the entire population of the Badlands down to the smallest baby had gathered to meet me… They all felt I was their man, their old friend; and even if they had been hostile to me in the old days when we were divided by the sinister bickering and jealousies and hatreds of all frontier communities, they now firmly believed they had always been my staunch friends and admirers. I shook hands with them all and…I only regretted that I could not spend three hours with them." A local hotel changed its name that same year to the Rough Riders Hotel. In 1986 the hotel was purchased and operated by the Theodore Roosevelt Medora Foundation.

The city of Medora is also home to the popular Medora Musical and the city has become one of the most popular tourist attractions in the state.

According to the Köppen Climate Classification system, Medora has a semi-arid climate, abbreviated "BSk" on climate maps.

All content from Kiddle encyclopedia articles (including the article images and facts) can be freely used under Attribution-ShareAlike license, unless stated otherwise. Cite this article:
Medora, North Dakota Facts for Kids. Kiddle Encyclopedia.