Born Lillian Marie Bounds in Spalding, Idaho, she grew up in nearby Lapwai on the Nez Perce Indian Reservation, where her father Willard worked as a blacksmith and federal marshal. She was the youngest of ten children, and the family struggled financially; her father died when she was seventeen. After graduation from Lapwai High School, Bounds and her mother moved down to Lewiston; she attended a year of business college then moved to southern California in 1923 to live with her sister Hazel's family. She was working at the Disney Studio in "ink and paint" as a secretary when she met Walt.

Lillian Bounds and Walt Disney married on July 13, 1925, in Idaho at her brother's home. The wedding was officiated by the rector of Lewiston's Episcopal Church of the Nativity. Walt Disney's parents did not attend. As Bounds's father was deceased, her uncle, who was chief of the Lewiston Fire Department, gave the bride away. She wore a dress that she had made herself. The couple had two daughters, Diane Marie Disney (1933–2013) and Sharon Mae Disney (1936–1993), the latter of whom was adopted. Disney had ten grandchildren: seven by Diane and her husband (Ron W. Miller), and three by Sharon and her two husbands, Robert Brown and William Lund.

Her film career includes work as an ink artist on the film Plane Crazy. Disney is credited with having named her husband's most famous character, Mickey Mouse, during a train trip from New York to California in 1928. Walt showed a drawing of the cartoon mouse to his wife and told her that he was going to name it "Mortimer Mouse." Disney replied that the name sounded "too depressing" and she was very proud to have suggested the name "Mickey Mouse" instead of Mortimer. 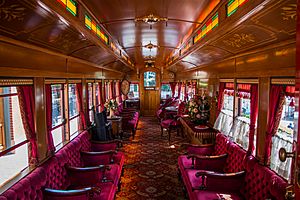 Interior of the Lilly Belle train car at Disneyland.

In 1987, she pledged a $50 million gift towards the construction of a new concert hall in Los Angeles. After several delays, the Walt Disney Concert Hall opened in 2003, six years after her death. She also helped fund the founding of The California Institute of the Arts.

In the 1990s, reflecting on her 41-year marriage to Walt Disney, she said, "We shared a wonderful, exciting life, and we loved every minute of it. He was a wonderful husband to me, and wonderful and joyful father and grandfather."

Disney suffered a stroke on December 15, 1997, which was exactly 31 years after the death of her first husband, Walt. She died the following morning at her home in Los Angeles at the age of 98.fr:Famille Disney#Lillian Marie Bounds

All content from Kiddle encyclopedia articles (including the article images and facts) can be freely used under Attribution-ShareAlike license, unless stated otherwise. Cite this article:
Lillian Disney Facts for Kids. Kiddle Encyclopedia.