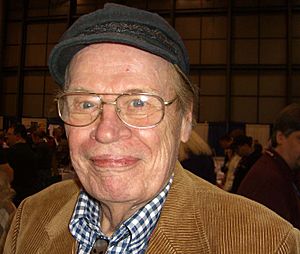 Richard Bache "Dick" Ayers (April 28, 1924 – May 4, 2014) was an American comic book artist and cartoonist. He was best known for his work as one of Jack Kirby's inkers during the Silver Age of Comics period in the late-1950s and 1960s. He worked on some of the earliest issues of Marvel Comics' The Fantastic Four. He was born in Ossining, New York.

All content from Kiddle encyclopedia articles (including the article images and facts) can be freely used under Attribution-ShareAlike license, unless stated otherwise. Cite this article:
Dick Ayers Facts for Kids. Kiddle Encyclopedia.