Toughkenamon is a census-designated place (CDP) in New Garden Township, Chester County, Pennsylvania, United States. The population was 1,492 at the 2010 census.

The area known as Toughkenamon was originally inhabited by Lenape Native Americans who spoke Unami. In the original survey, in 1700, the surveyor notes that he crossed the Dochcanamon Hill. Other forms of spelling this name were used, such as Tokenamon, Taukenamon, Taughlikenemon. The present spelling is Toughkenamon, pronounced by a Lenape descendant too-ken-ah-mahn', with accent on the last syllable. It is of Indian origin, and is said to signify "Fire-brand hill."

Thomas and Mary Rowland settled in the valley, near the present village of Toughkenamon, in 1706, being perhaps the first settlers who purchased lands in New Garden Township. They came to the township from old Ashton Township, old Chester County, now in Delaware County.

Toughkenamon has been of significant importance in the development of the United States. First, the characteristics of the interactions between settlers and Lenapes was a microcosm of the conflicts that would occur in the future. For example, the farmers dug trenches around their crops, and filled them with water, to prevent reoccurrence of the conflagration that occurred when local Lenapes started a burn. The fact that the original Toughkenamon settlers maintained water-filled trenches is evidence that they had dialogue and an understanding of the importance of the burn. The traditional burn was an ancient way to increase yields of local grains and tubers, and increase the deer population. But later settlers no longer interacted with the departed tribe, so falsely assumed the burns had been solely aimed at destroying their ancestors' crops, adding to mistrust of remaining Indian families in nearby counties.

Toughkenamon Hill has been quarried for centuries.

In later centuries Toughkenamon was considered a village. It was an early industrial center due to its strategic location on the old Baltimore Pike between Philadelphia and Washington, D.C., easy access to raw materials such as wood, water and ore. Even today, businesses critical to national wholesale distribution of perishable foods are located in and near Toughkenamon. 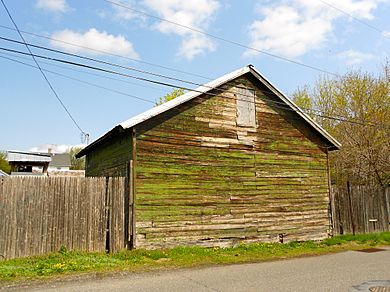 There were 369 households, out of which 40.9% had children under the age of 18 living with them, 59.3% were married couples living together, 6.8% had a female householder with no husband present, and 23.6% were non-families. 18.2% of all households were made up of individuals, and 8.9% had someone living alone who was 65 years of age or older. The average household size was 3.41 and the average family size was 3.69.

All content from Kiddle encyclopedia articles (including the article images and facts) can be freely used under Attribution-ShareAlike license, unless stated otherwise. Cite this article:
Toughkenamon, Pennsylvania Facts for Kids. Kiddle Encyclopedia.